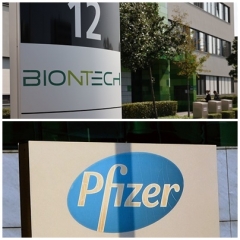 Berlin (CNSNews.com) – The European Union announced Wednesday that it has sealed a deal with Germany’s BioNTech and Pfizer in the United States to secure 300 million doses of their newly-developed coronavirus vaccine, following this week’s announcement that phase III trials have found it to be 90 percent effective.

The BioNTech-Pfizer partnership has now secured deals with the E.U., United States, Britain, Japan and China, estimated to be valued at around $13 billion euros ($15.3 billion) next year, according to a forecast by U.S. investment bank Morgan Stanley.

Announcing the agreement, European Commission President Ursula von der Leyen said the E.U. was also “now consolidating an extremely solid vaccine candidate portfolio, most of them in advanced trials phase. Once authorized, they will be quickly deployed and bring us closer to a sustainable solution of the pandemic.”

Like the U.S. and others, the E.U. is keen to maintain a diversified vaccine supply chain, and has already signed contracts with drugmakers AstraZeneca, Sanofi-GSK and Janssen Pharmaceutica NV. It has also been in talks with CureVac and Moderna.

The BioNTech-Pfizer will need to be authorized before use in Europe by the European Medicines Agency and by the Food and Drug Administration for use in the U.S.

BioNTech previously specialized in cancer treatment research before identifying a possible application of its “messenger RNA” vaccine technology to COVID-19.

It then partnered with U.S. drugmaker Pfizer on a project to develop a vaccine and has since secured millions in funding as the pandemic intensified.

The Trump administration struck a deal with Pfizer last July to manufacture and distribute in the U.S. 100 million doses of the vaccine, at a cost of almost $2 billion, with the option of supplying a further 500 million doses under new terms.

Pfizer did not accept research funding from the U.S. government, instead investing $2 billion of its own money to develop the vaccine candidate in partnership with BioNTech – which did accept around $437 million in funding from the German government and a $117 million loan from the European Investment Bank.

The decision to pursue a for-profit model for a vital vaccine has drawn fire in some quarters, with Oxfam among those critical of the predicted profit margin.

While the Pfizer- BioNTech vaccine will be sold to the U.S. government at around $19.50 per dose, U.S. drugmakers Johnson & Johnson and AstraZeneca have pledged to make their coronavirus vaccines available on a not-for-profit basis during the pandemic, with AstraZeneca planning to charge governments $3-$5 a dose.

Before its role at the forefront of COVID vaccine development, BioNTech was not widely known, and since its establishment in 2008 it has not brought a product to market and has not turned a profit. It recorded a loss of 210 million euros ($248 million) in the latest quarter.

The company in the past received funding from German billionaire brothers Thomas and Andreas Strüngmann, who made their fortune with generic drugs, and through Pfizer, which it had already been collaborating with on flu vaccines since 2018.

Since beginning work on developing a vaccine for COVID-19, BioNTech has attracted millions in funding from a range of sources, including 250 million euros ($294 million) from Singapore’s Temasek Holdings and other investors through convertible bonds in June.

The COVID-19 pandemic has to date cost almost 1.3 million lives, with more than 52 million confirmed cases in 217 countries and territories.