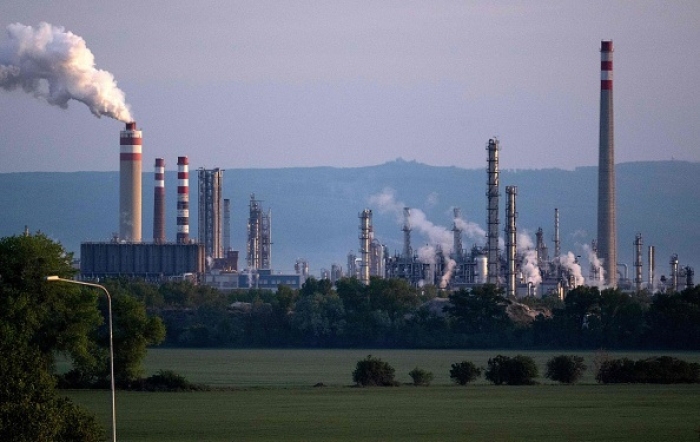 A mineral oil refinery in Slovakia, one of the E.U. member-states most reliant on Russian fossil fuels. (Photo by Joe Klamar/AFP via Getty Images)

Berlin (CNSNews.com) – A 300 billion euro ($314 billion) energy package announced by the European Union’s executive Commission on Wednesday offers extra funding to heavily oil-dependent landlocked countries which are holding up efforts to agree on a bloc-wide embargo on Russian oil, to punish Moscow for invading Ukraine.

With an overall aim of lowering fossil fuel dependency, the “REPowerEU” package will channel funds towards promoting a more efficient use of power among member-states, cutting gas and oil demand by five percent in the process.

The European Commission (E.C.) said in its announcement that “85% of Europeans believe that the European Union should reduce its dependency on Russian gas and oil as soon as possible to support Ukraine.”

“The measures in the REPowerEU Plan can respond to this ambition, through energy savings, diversification of energy supplies, and accelerated roll-out of renewable energy to replace fossil fuels in homes, industry and power generation,” it said.

On Monday Hungary, the Czech Republic and Slovakia, all heavily reliant on Russian oil, blocked E.U. efforts to agree on an embargo that would see all imports of Russian crude and refined oil product phased out within six months. They called for more time and for up-front funding support.

Lithuanian Foreign Minister Gabrielius Landsbergis criticized the opposition, which was led by Hungary, saying that “the whole union is being held hostage by one member state.”

Austrian Chancellor Karl Nehammer, however, directed criticism at the E.C. itself for allowing divisions among E.U. member-states to be made public.

In a meeting with his Czech counterpart in Prague, Nehammer said the E.C. should only announce the outcome in such cases “once negotiations have been fully concluded.”

“The sharper, the more profound, the more far-reaching sanctions are considered, the more important it is to discuss them sufficiently with the individual member-states beforehand, so that the impression of dissent does not arise on the outside,” he said.

In an apparent bid to help sway the opposing countries, the new plan earmarks around two billion euros in investment funding to assist the transition to alternative energy sources.

“We are taking our ambition to yet another level to make sure that we become independent from Russian fossil fuels as quickly as possible,” E.C. President Ursula von der Leyen said in Brussels.

Russian President Vladimir Putin this week scoffed at the likelihood of an E.U. oil embargo actually being implemented.

“Obviously, some E.U. states, in whose energy balance the share of Russian hydrocarbons is especially high, will not be able to do this for a long time, to ditch our oil,” he told a meeting of Russian government ministers and oil industry leaders.

“Of course, such economic suicide is a domestic affair of the European countries,” Putin added.

Meanwhile, the U.S. has proposed imposing a tariff or price cap on Russian oil exports, to impact revenues flowing to Moscow while limiting price surges.

Treasury Secretary Janet Yellen visited Poland, Belgium, and Germany on Wednesday to discuss the tariff idea with officials, ahead of a meeting of G7 finance ministers and central bank governors in Bonn running through Friday.

She said discussions between the U.S. and E.U. were still ongoing.

“No decisions have been made,” Yellen said in Bonn. “This is important for Europe to decide what they think is best. But we continue to have those discussions.”

“All of us share the objective of diminishing the revenues that Russia will have to buy goods and services that will help their economy and enable them to wage war,” she said.

Politico cited Economy Commissioner Paolo Gentiloni as saying in Brussels Wednesday that the U.S. pitch was “quite an interesting proposal,” but that the E.U. remained focused on its proposed oil embargo.