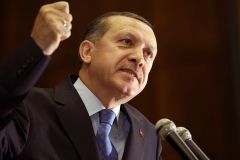 Berlin (CNSNews.com) – European Union foreign ministers appear to have rejected an eleventh-hour Turkish call for negotiations, ahead of a key leaders’ summit where sanctions over the continued Turkish activity in contested waters near Greece are on the agenda.

E.U. foreign policy chief Josep Borrell said after a meeting of the bloc’s foreign ministers that sentiment towards Turkey’s continued gas exploration in waters claimed by Greece was clearly not positive.

“We haven’t seen much progress or improvement since the last European Council [meeting],” Borrell said. “We have not seen a fundamental change of direction in Turkey’s behavior. On the contrary, in several aspects the situation has worsened.”

Greek Foreign Minister Nikos Dendias said all of the ministers had agreed that Turkey “failed to grasp the positive message sent by the E.U.” when leaders met in October, and it was therefore clear that the E.U. must respond to Turkey’s behavior.

Greece, an E.U. member-state, and Turkey, which aspires to become one, have long tussled over disputed claims to natural gas reserves and maritime boundaries in the eastern Mediterranean, with tensions escalating in August after Turkey launched a research vessel accompanied by two navy ships.

Mulling Greece’s appeal for sanctions during the previous meeting in October, E.U. leaders at the time chose not to go the sanctions route, instead proposing a “positive” E.U.-Turkey agenda, which offered to push ahead with modernization of the customs union and visa-free travel for Turks.

It did say, though, that should provocation continue, the E.U. would use “instruments at its disposal” to “defend its interests.”

Turkey withdrew the research vessel in November, but another continues exploration south of Cyprus. It announced plans on Sunday to hold target practice near the small Greek island of Kastellorizo.

President Recep Tayyip Erdogan’s hard line stance on the decades-long division of Cyprus – also an E.U. member-state – has also kept him at odds with Brussels.

Looking ahead to the summit, Erdogan on Monday called on the E.U. to negotiate, accusing Greece and Cyprus of using the E.U. as a “battering ram” against Turkey.

But Germany, which currently holds the rotating E.U. presidency, opposes sanctions, supported mainly by Spain and the Netherlands.

Although Chancellor Angela Merkel has expressed a preference for direct talks between Turkey and Greece, German Foreign Minister Heiko Maas indicated on Monday that Germany’s patience, too, was wearing thin, after “too many provocations.”

“At the same time, even Germany and like-minded E.U. members such as Spain and the Netherlands increasingly recognize that some kind of pressure needs to be exerted to thwart Erdogan’s brinksmanship in the Mediterranean,” he said.

“At this stage, it still seems unlikely that any sanctions adopted will be very significant – possibly some moratoriums on arms trading with Turkey, for instance,” he predicted. “Any sanctions adopted at this time will look more like a shot across Turkey’s bow than a real policy to punish Turkey for its confrontations with the E.U.”

Aykan Erdemir, senior director of the Turkey program at the Washington-based Foundation for Defense of Democracies, said there was a growing understanding in Brussels that relying on the threat of sanctions alone to induce change in Erdogan’s behavior has failed to deliver positive results.

Should an impending Biden administration be tougher towards Turkey than its predecessor, that could encourage the E.U. to join Washington in containing Erdogan’s rogue policies, he said.

Regardless, Erdemir said sanctions remain a challenging prospect for the E.U.

"Given the significant divisions within the European Union about how to deal with Erdogan, Brussels appears to lack capacity to push back against the Turkish president’s hostile policies and rhetoric,” he said.

“Erdogan has already demonstrated that he has a range of options to retaliate against the European Union by weaponizing Syrian refugees and taking European nationals hostage on trumped up charges, and he will not refrain from taking such steps again.”