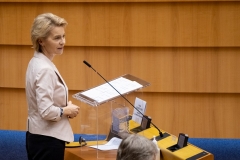 Her comments came ahead of a key summit which some say could redefine the bloc’s relationship with Turkey, an aspiring member of the E.U.

“Turkey is and will always be an important neighbor,” Von der Leyen told the European Parliament in Brussels, delivering her first state of the union address. “But while we are close together on the map, the distance between us appears to be growing.”

Von der Leyen stressed that the E.U. should not allow the Turkey migration deal – which it depends upon to mitigate refugee flows into Europe – to limit its ability to act, despite repeated Turkish threats to “open the flood gates.”

“Yes, it is hosting millions of refugees, for which we support them with considerable funding,” she said. “But none of this is justification for attempts to intimidate its neighbors.”

Von der Leyen reaffirmed that Greece and Cyprus can count on Europe’s “full solidarity on protecting their legitimate sovereignty rights.”

The E.U. has been mulling sanctions against Ankara over the Greek-Turkish dispute over control of seabed resources in the eastern Mediterranean, which escalated sharply over the last month.

Members have so far been unable to reach consensus on a response, however.

France has been the most vocal, along with Greece and Cyprus, in calls for economic sanctions, but has met with resistance from Italy, Spain and Malta and Germany. which advocate dialogue.

With the feuding neighbors both running military drills – in Greece’s case, jointly with France and the United Arab Emirates – and both vocally threatening to defend what it calls its territory, fears that a “spark” could lead to conflict have been high.

Malik Azmani, a Dutch lawmaker on the European Parliament’s foreign affairs committee, called for tougher measures against Turkey, including putting a halt to Turkey’s long-stalled candidacy to join the E.U.

“The E.U.'s current policies and strategy towards Turkey are not working,” he added.

In addition to severe sanctions, Azmani called for ending Turkey’s E.U. candidacy. He also said E.U. member-states should deploy naval vessels to the area to ensure the territorial integrity of Cyprus and Greece. 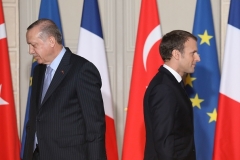 Turkey has wanted to join the E.U. for decades, and in 1997 was formally accepted as eligible. Accession negotiations began in 2005 but the E.U. suspended the process in 2018, citing backsliding by President Recep Tayyip Erdogan in the areas of democracy, rule of law and fundamental rights.

On Tuesday, E.U. foreign policy chief Josep Borell reported that work toward a formal decision on sanctions or other measures against Turkey would continue at a European Council summit at the end of the month. The outcome, he said, could be “watershed” moment in Turkish-European relations.

“The world will go one side or the other, depending on what is going to happen on the next days,” he said.

“Unhappily today there is not an agreement [on sanctions], but you know that sanctions require a strong agreement between member-states, unanimity even, and for the time being this is not the case.”

In her address, Von der Leyen called on the E.U. to be “courageous” and remove the unanimity requirement in order to become more responsive.

“Why are even simple statements on E.U. values delayed, watered down or held hostage for other motives?” she asked. “When member-states say Europe is too slow, I say to them be courageous and finally move to qualified majority voting – at least on human rights and sanctions implementation.”

Turkish Foreign Minister Mevlut Cavusoglu denied that the return of the ship was a concession, however, saying it was merely undergoing routine maintenance and would resume activities soon.

Nicholas Danforth, a fellow at the Wilson Center’s Kennan Institute, said the retreat may nevertheless be perceived as a concession.

“Whatever actually prompted the Oruc Reis to return to port, many will attribute it to Europe’s concerted response,” Al-Monitor quoted him as saying.