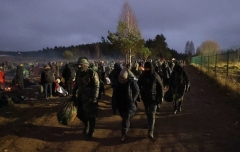 Migrants hoping to cross the Belarusian-Polish border into Poland on Thursday. (Photo by Maxim Guchek/BELTA/AFP via Getty Images)

Berlin (CNSNews.com) – Germany on Thursday disputed a Belarusian claim that it supported a proposal to accept 2,000 migrants among those stranded on the Belarus-Poland border, in exchange for Minsk repatriating the remaining 5,000 to their home countries.

“A piece of false information today was that the German federal government would be ready to take a certain number of refugees to Germany – it was said to be 2,000,” acting interior minister Horst Seehofer said in Warsaw after meeting with his Polish counterpart Mariusz Kaminski. “This report is wrong.”

In a call with Chancellor Angela Merkel on Thursday, Belarusian President Alexander Lukashenko reportedly offered to arrange the return of 5,000 migrants from Belarus to their home countries – mostly in the Middle East – if the E.U. would take in 2,000.

State news agency BELTA quoted Lukashenko’s spokeswoman Natalja Eismont as saying that Merkel in the call had “agreed to discuss this proposal with the EU., including a possibility to arrange a humanitarian corridor to Germany.”

In Warsaw, Seehofer said on hearing this claim he had immediately contacted Merkel who confirmed that Germany had not agreed to accept a certain number of refugees.

There is no official count of the thousands of migrants stuck on the Belarus-Poland border, most of whom have come from Iraq, Syria, and Yemen, in the hopes of crossing the border into the European Union. The E.U. accuses Lukashenko of deliberately facilitating the migrants’ travels, in what it calls a “hybrid” attack in retaliation for E.U. sanctions.

Belarusian authorities said Thursday they had moved the main body of migrants from the border to a warehouse, in an apparent bid to lower escalating tensions. Poland says many still remain near the border, however.

Iraq announced early this week it would repatriate its citizens among the stranded migrants who wish to return home, and an Iraqi foreign ministry spokesman said on Thursday that a plane carrying 430 migrants had arrived in Erbil. More repatriation flights would follow, said Ahmed al-Sahaf.

Poland’s Defense Ministry says attempts to cross the border continue, facilitated by Belarusian forces. It said around 100 migrants were detained on Thursday.

On Twitter the ministry accused Belarusian troops of first reconnoitering the area, and probably damaging the border fence.

“Then the Belarusians forced the migrants to throw stones at Polish soldiers to distract them,” it said. “An attempt to cross the border took place several hundred meters away.”

Any proposal by Belarus for the E.U. to take in migrants is likely to face opposition. Like Poland, Latvia and Lithuania – which also border Belarus – have refused to accept migrants wanting to enter the bloc via Belarus.

Slovenian Interior Minister Ales Hojs on Thursday called for the 17-nation bloc to seal its external borders – “even with fences if necessary.”

“There is no more ‘Refugees Welcome,’” Hojs told an international conference on migration in Sarajevo, referring to a slogan that became prevalent in the E.U. during earlier migrant crises.

The E.U. imposed sanctions on Minsk after Lukashenko’s disputed re-election – for a sixth term – in an August 2020 election, and a regime crackdown on dissent that followed.

G7 foreign ministers in a joint statement condemned the Lukashenko regime’s “orchestration of irregular migration across its borders.”

“The actions of the Belarusian regime are an attempt to deflect attention from its ongoing disregard for international law, fundamental freedoms and human rights, including those of its own people,” the statement said.

Meanwhile some here have criticized Poland’s handling of the situation.

“Those who reach Poland have a right to apply for asylum in Poland or in the European Union,” former German government migration adviser Gerald Knaus told DW on Thursday. “And if we want to stop people going to Belarus, we need to think about other ways to do that.”

Knaus said Poland’s prime minister was not claiming that his government’s actions were in line with E.U. law, but instead arguing that as Poland is “facing an invasion,” E.U. law is irrelevant.