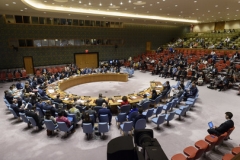 Berlin (CNSNews.com) – Reviving a decades-old debate, four countries that have long sought membership on an expanded U.N. Security Council are using the opportunity of the 75th U.N. General Assembly to urge the U.N. to restart talks on UNSC reform, with “concrete outcomes” within 12 months.

“What is needed is a representative UNSC to help us restore confidence in international cooperation and global governance – urgent more than ever in these testing times,” foreign ministers of the so-called G4 group -- Germany, Brazil, Japan, and India – said in a statement.

The U.N. body responsible for maintaining international peace and security comprises five permanent, veto-wielding members – Britain, China, France, Russia, and the United States – and 10 non-permanent members elected for two-year terms. The makeup of the P5 largely reflects the balance of power at the end of World War II (in 1971 the General Assembly voted to give the “China” seat to the communist People’s Republic of China and expelled Taiwan).

The G4 criticized the lack of progress in intergovernmental negotiation on Security Council reform, which started in its current form in 2009, criticizing “attempts to derail” the process, arguing that virtual meetings could have been adopted to keep it moving.

Reforming the council is the only way to stop it from becoming “obsolete,” argued the Indian government, which chaired the G4 meeting. “Broader membership of the Security Council, with increased and enhanced representation of countries … including from Africa, will allow it to preserve its credibility and create the political backing needed for the peaceful resolution of today’s international crises.”

“Too often the U.N. Security Council is blocked when clear decisions are needed,” German Chancellor Angela Merkel said this week, in reference to the use of the veto to block measures a particular member opposes.

Discussion over reforming and expanding the UNSC have been underway since the 1990s, receiving a boost when U.N. secretary-general Antonio Guterres placed it on his personal agenda in 2019.

The G4 supports the idea of permanent seats for themselves, plus two for African countries, as well as the addition of more nonpermanent seats.

The European Union supports reform, and in a report this month said that although COVID-19 exposed weaknesses in the multilateral system, the order had already been challenged, in particular by the Trump administration’s withdrawal from the Iran nuclear deal and the suspension by the U.S. and Russia of their obligations under the 1987 Intermediate-Range Nuclear Forces (INF) Treaty.

Even permanent members appear to agree the council should become more “inclusive,” but remain divided on what form that would take.

In his speech to the General Assembly this week, Russian President Vladimir Putin agreed with the idea of a more “inclusive” Security Council, but was quick to dismiss any notion of limiting veto power.

“The Security Council should be more inclusive of the interests of all countries, as well as the diversity of their positions,” Putin said. “Which cannot be achieved unless the permanent members of the Security Council retain their veto power.”

“Such a right pertaining to the five nuclear powers, the victors of the Second World War, remains indicative of the actual military and political balance to this day,” he added.

The U.S. response to the campaign by aspiring permanent members has been cautious. President George W. Bush backed Japan’s bid for a seat, and in 2010 President Obama endorsed a permanent council seat for India, “in the years ahead.” Last February, President Trump reaffirmed U.S. support “for India’s permanent membership on a reformed U.N. Security Council.”

Andreas Bummel, executive director of Democracy Without Borders, was not optimistic about the prospects of reform, pointing to “very different views among the U.N.'s membership.”

“Ironically, it is easier for the U.N. to create a new parliamentary body than to make any changes to the Security Council's setup,” Bummel said. “The former can be done by a majority vote of the U.N. General Assembly based on Article 22 of the Charter, whereas the letter requires a cumbersome charter amendment and thus a two-thirds majority in the General Assembly as well as the approval of all permanent five members of the Security Council.”