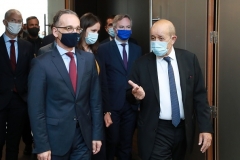 Berlin (CNSNews.com) – The German and French foreign ministers said Wednesday Moscow has failed to provide any “credible explanation” for the poisoning of Kremlin critic Alexei Navalny and must provide answers or face European sanctions, charging that “there is no plausible explanation for the poisoning of Mr. Navalny other than Russian involvement and responsibility.”

The joint warning from Heiko Maas and Jean-Yves Le Drian followed an announcement by the Organization for the Prohibition of Chemical Weapons (OPCW) that it had found in Navalny’s blood and urine samples “cholinesterase inhibitors” with “similar structural characteristics” to the outlawed chemical agent Novichok.

Germany said the OPCW finding “confirms unequivocally” the earlier findings of its military laboratory that Navalny had been exposed to Novichok. The anti-corruption campaigner, a leading critic of President Vladimir Putin, fell gravely ill on a domestic flight inside Russia before being transported to a Berlin hospital for treatment. He appears to be making a recovery.

Maas told German lawmakers Wednesday that if Russia does not clear up the matter, “targeted and proportionate sanctions against Russian officials” would be warranted.

He made clear that the proposed sanctions would target the controversial Nord Stream 2 gas pipeline between Russia and Germany – as some in Germany have been calling for. Instead, they would be aimed at hose involved in the development or use of Novichok.

Maas added, however, that “all options remain on the table.”

Navalny himself has advocated a freeze on the pipeline project, which has been strongly opposed by the U.S. and drawn criticism by the European Union (E.U.), which says it contravenes E.U. principles of diversifying energy supplies.

In a Bild interview on Wednesday, Navalny directly accused Putin of ordering the poisoning.

“I believe that was a direct order from Putin and I don’t expect there will ever be a real investigation,” Navalny said. “If there were fair elections tomorrow, we would beat Putin … but Putin is crazy about money and power. He will do anything to stay in power, anything.”

Navalny also criticized former German Chancellor Gerard Schröder – a close associate of Putin who has served on the board of the Nord Stream 2 project – for having raised doubts about allegations against Russia over the poisoning.

Navalny accused Schröder of being “paid by Putin” and of “trying to protect murderers.”

Schröder responded to the interview by denying Navalny’s claims of payment from Putin, and threatening legal action against Bild.

The OPCW report is politically sensitive for Russia, as it did not include Novichok among its declared chemical weapons when it joined the Chemical Weapons Convention (CWC). A finding that Russia still has such chemical weapons would thus be a breach of the agreement.

Novichok was also used in the attempted murder of former Russian double agent Sergei Skripal in Britain in 2018. Russia denied any involvement in the Skripal affair, and has largely dismissed the latest OPCW report.

The Russian foreign ministry said in a statement on Monday the Navalny incident has been politicized by Western interests.

“This intrinsically fantastic story, initiated at the behest of Berlin by its Euro-Atlantic allies together with the OPCW Technical Secretariat, continued in line with the pre-planned conspiratorial scenario,” it said.

In his remarks to lawmakers on Wednesday, Maas rejected Russia’s accusations as “absurd.”

The OPCW report was provided to the German government first, although Maas said the agency would make it available to all 193 CWC member states, including Russia.

European Council president Charles Michel said on Tuesday that an E.U. response, “based on the new information,” would be discussed at an E.U.-Ukraine summit in Brussels later this month.

Germany and France would have to take their sanctions proposal up with the E.U., where any measure would require unanimity from all 27 member states.