(CNSNews.com) – It was one of Italy’s darkest days.

On the morning of August 2, 1980, as Italians milled through the bustling Bologna Centrale railway station, a timebomb detonated inside the crowded waiting room, blowing almost the entire building, and a waiting train, to pieces.

Eighty-five people were killed, more than 200 were severely wounded, and thousands endured several painful hours trapped beneath the burning rubble in the summer heat as passersby tried to join authorities in issuing lifesaving aid.

Several members of the Italian neo-fascist terrorist outfit known as the Nuclei Armati Rivoluzionari (NAR, or Armed Revolutionary Nuclei) were later sentenced for the attack, although the group denied involvement. Immediately after the assault, however, a number of leading NAR figures fled or went underground.

One of the first to escape, Stefano Procopio allegedly used a fraudulent passport to make his way to Lebanon where he trained with Falangist militias, the subject of an Interpol “Red Notice” and one of the continent’s most wanted men.

Yet 13 years later he was dramatically brought to book by U.S. authorities – and, incidentally, Robert De Niro – a tale that only now is coming to light for the first time.

“An international Red Notice was issued through Interpol some years before, and it was requested by the U.S. Attorney of the Eastern District of N.Y., that we up the case,” recalled Craig Caine, a then New York-based inspector for the U.S. Federal Marshals (USMS).

Caine said the late Supervisory Deputy U.S. Marshal Mike Hollander had given him “carte blanche to pick a team and run with it.”

Through the U.S. Attorney’s Office, USMS investigators secured a reverse “trap and trace” on Procopio’s mother’s phone in Italy. Once information started coming in, investigators came up with two New York addresses – one in the Bronx, and one in Manhattan, directly across the street from De Niro’s popular restaurant, the Tribeca Grill.

“If he was indeed here, we didn’t know if he was planning another terrorist act, so we pulled out all the resources we had available,” Caine said. “We received information that the mother had called both the Bronx and Manhattan phone numbers, and through investigative work, we were able to ascertain that the phones were subscribed to a female.”

Investigators learned that the woman had a Jeep with New Jersey tags and was using the Bronx apartment where the phone was located. A team of about 30 investigators – U.S. Marshals, NYPD, DEA and Customs – assembled and started surveillance on both locations. The NYPD Bomb Squad and their Emergency Service Unit were also placed on standby.

“To complicate the situation, President Clinton was due to arrive in New York – just a stone’s throw from where we believed Procopio was staying in Manhattan,” Caine said.

“We contacted the Secret Service to advise them of our plan of action. The [US]SS took this very seriously and supplied a Counter Assault Team. Since we had no idea what might happen, [US]SS agents deployed snipers on various rooftops and stationed extra agents in sensitive positions in and around the area.”

But as the most critical view of the target could be had from De Niro’s famed restaurant, his silver screen fame slipped seamlessly into the arrest plan too.

“We convinced [Tribeca Grill] management to supply a few waiters’ uniforms and had personnel having lunch in the outdoor seating area,” Caine explained.

Caine and his partner Lenny DePaul had teams watching the Bronx apartment and were informed that the woman had climbed into the Jeep there, with boxes of unknown content, and was heading down the West Side Highway towards Manhattan.

“The Jeep pulled up to the Manhattan target location. The woman just sat in the vehicle. All of a sudden, a person fitting Procopio’s description emerged from the building and was walking towards the Jeep,” Caine recalled. “The agents and detectives sitting in De Niro’s put a positive I.D. that this was our guy.”

The team debated whether to raid the two locations simultaneously or wait to see what developed, but Caine made the call that the safest thing would be to nab the suspect as soon as possible – and before he could get his hands on one of the boxes.

Over the radio he gave the order for all units to converge on the target, and the street exploded into action. Cars flew up one way streets from all sides, agents in waiters’ uniforms shed their guises to reveal raid jackets, and handguns, shotguns, and machine guns were drawn by dozens of agents.

Procopio, Caine remembered, struggled briefly as an officer bore him to the ground. He finally gave in and was handcuffed.

“Catching my breath, as I looked around, I heard clapping. There were all these tourists standing around applauding and snapping photos,” he said.

“It turned out that De Niro’s is a major tourist attraction, and they assumed it was a scene from a movie,” Caine laughed. “They wanted to know when Robert De Niro was going to show up.”

“I said, ‘Stick around, because he getting his make-up put on for the next scene,’ and we bolted. This was the first and only time I received a standing ovation for just doing my job.” 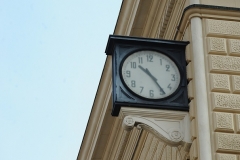 The clock at the Bologna station, stopped at the time of the bombing in August 1980. (Photo by Roberto Serra - Iguana Press/Getty Images)

Italian authorities flew in for an extradition hearing, complete with a doctor in case the suspect required a sedative. Procopio chose not to fight extradition, and he was escorted directly to the JFK tarmac.

Despite his capture, more than 40 years since the bombing, what exactly happened – and the role of left-wing, right-wing, and even Middle East-based entities in trying to destabilize Italy’s government – remains the subject of ongoing speculation and investigation.

It was not until earlier this year that an Italian court determined that it was a “state massacre” and subsequently issued a life sentence to a fourth NAR member.

The Bologna bombing still rates among the most horrific terrorist attacks in Europe, and much of the findings and documentation remains classified. The only surviving structure, the looming clock tower, still stands at the station which was rebuilt after the bombing. The clock remains frozen at 1025 local time, marking the moment that lives were lost and changed forever.