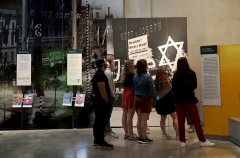 (CNSNews.com) – Amid Mideast tensions and evidence of teeming antisemitism around the world one new initiative is offering something of a silver lining – an education program designed for Muslim students is set to debut in the United States this spring.

For decades, misconceptions have swirled around the Holocaust in much of the Muslim world. It has been dismissed, buried by conspiracies – and denied outright. But that is now on a path toward change.

Championed by NBA star and Turkish human rights activist Enes Kanter, the groundbreaking, ten-week Holocaust Education Program 2021 provides teacher development programs and curriculum support and implementation to a group of high school students in New York City, with the aim of expanding into other Muslim communities domestically and internationally.

It includes a field trip to the Holocaust Museum in Washington DC and a speaker series featuring Muslim community leaders and Holocaust survivors.

“There is so much hate in this world, and unfortunately, Islamophobia and antisemitism are increasing,” said Kanter, a player for the Portland Trail Blazers and Holocaust Education Program Ambassador.

“As an athlete and role model for millions of youth, especially for Muslims, I see this as my responsibility to fight with antisemitism and to educate Muslim youth about the Holocaust.”

The program, the first of its kind, is organized and supported by The Blue Card, a charity that assists Holocaust survivors, in partnership with the Turkish Cultural Center New York, which promotes Turkish-American friendship.

Muslim communities will be guided through the process of learning the truth about the Nazis’ genocide of six million European Jews during World War II, a horrific program of systematic annihilation that has induced decades of generational trauma and brought about many lessons in life and policy.

Reflecting on his upbringing in Turkey, Kanter acknowledged that “unfortunately, antisemitic views are popular,” adding that he has promised himself to “take action whenever I have an opportunity to learn, share and support the educational projects.”

“We have to find out the roots of the ignorance and develop educational projects to prevent it,” he said. “As a Muslim, I’m supporting to development of an educational curriculum for Muslim students.”

Unchecked for too long, antisemitism is an ongoing and growing problem throughout New York and across the country. A recent survey found that 63 percent of U.S.-based Jews encountered some degree of antisemitism over the past five years.

“The Holocaust teaches the lessons of humanity,” said Mehnaz M. Afridi, a Muslim associate professor of religious studies at Manhattan College, a private Catholic school in the Bronx. “Holocaust survivors inspire us to be courageous and faithful even under the most challenging situations.”

“Muslims should learn about the Holocaust because we can learn how to combat racism and religious prejudice,” she said. “Islam teaches us that we must stand up to the truth and spread the message of social justice to our future generations.”

Program coordinator Emre Celik stressed that it is “imperative that the project not only be implemented with Muslim students for their benefit and the benefit of their families and communities, but its success will play an important role in setting a precedent for other Muslim schools and communities to follow.”

“It is most certainly a historic and unique step in the right direction,” he said.

The new program comes at a time when other states and businesses are also making extra efforts to curb the conspiracy rhetoric around the Holocaust.

Late last month, Wisconsin Gov. Tony Evers signed into law legislation mandating that schools include lessons about the Holocaust, and other genocides.

Evers said in a statement the bill would “affect generations of kids in our state and bring increased awareness, and recognition in our schools to the tragedies of the Holocaust, the pervasiveness of antisemitism to this day, and hopefully cultivate a generation that is more compassionate, more empathetic, and more inclusive.”

Facebook CEO Mark Zuckerberg said last year change was pivotal as data indicated “an increase in antisemitic violence,” with the company highlighting a survey showing that almost a quarter of adults between the ages of 18-39 said they thought the Holocaust was a myth or exaggerated.

This month the San Francisco Board of Supervisors unanimously passed a resolution backing a California state Senate bill to expand Holocaust education for middle and high school students.

The “Never Again Education Act” would set up a Governor's Council on Genocide and Holocaust Education, to “establish best practices for, and promote the implementation of, education on genocide, including the Holocaust.” It would also be a requirement of the council to submit a progress report to the legislature.