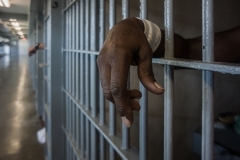 (CNSNews.com) – It is the stuff of nightmares.

Young men whose healthy limbs are severed by their very own government based on arbitrary and unproven crimes, rendering them a life of even more poverty in the realms of the anguished and disabled.

This is modern-day Iran, wrapped in the markers of the medieval.

“People whose limbs are amputated are normal people who are hungry and are stealing something for their personal need. It is really beyond belief that any government can take such measures to punish poor people like them, who have no other way of providing for themselves and their families,” noted Sadeq Saba, editor at Iran International TV.

On Valentine’s Day, authorities flogged Hadi Rostami, who is incarcerated at the Urumieh prison in West Azerbaijan province, for “disrupting prison order.” Described as deeply traumatized and suicidal, he was sentenced in 2019 to having four fingers removed, following what Amnesty International declared to be a “grossly unfair [robbery] trial marred by torture-tainted ‘confessions.’”

Over the past two months, according to the human rights group, officials have been threatening that the surgical sentence could be carried out any moment, prompting Rostami to embark on a hunger strike. It was that protest action that led to the flogging for disrupting order.

In the fall of 2020, Iran’s Supreme Court upheld sentences of four-finger severance for Rostami and three other men.

Others in line for the gruesome state-sanctioned punishment include two brothers held at the Urumieh Central Prison in north-western Iran, Mehrdad Teymouri, 30, and Shahab Teymouri, 35, who face the amputation of four fingers from each of their right hands, in keeping with the Islamic Penal Code punishment for theft. A court last October dismissed their final appeals.

Last year, a court in the same city sentenced Arash Ali Akbari, 32, to the same retribution.

Late last year, Amnesty reported that a guillotine was being prepared on prison grounds to carry out at least six inmates’ amputations, although it remains unclear if any have taken place so far.

Article 278 of Iran’s shari’a code states that “the four fingers of their right hands will be cut off for four counts of robbery,” and that “the fingers must be cut off from the bottom, leaving only the palm and the thumb,” designed both to deter and chasten a convicted person. The right hand is amputated for a first serious offense and the left foot for a second serious offense.

The punishment is a stark violation of Article 7 of the International Covenant on Civil and Political Rights, which prohibits torture and “cruel, inhuman or degrading treatment or punishment,” and declares that “no one shall be subjected without his free consent to medical or scientific experimentation.” Iran is a state party to the ICCPR.

Despite its existence in Iran’s legal code, the antiquated punishments have not been common. Five known cases surfaced between 2000 and 2008, yet policy observers considered amputations to have mostly disappeared from the arsenal of punishments – until a recent chilling resurgence.

Given the regime’s lack of transparency, it’s unknown how many such sentences are handed down and carried out. Activists inside Iran  believe the real number likely far exceeds those that have come to light in recent months. The Iran-based rights organization Abdurrahman Boroumand Center has documented at least 129 amputation cases from 2000 to 2020. The Iran Human Rights Monitor has logged upwards of 215 between 2007 and 2017 alone.

An activist and former inmate in Iran, who requested anonymity given security concerns, said that “many amputations are performed secretly in prisons.”

“Most of these incidents occur in small city prisons, and the news is not published at all. There is a prison in Mazandaran province in Sari city named ‘Prison Tir Kola.’ There have been several amputations and even numerous executions,” the source said. “This prison is not on the list of human rights activists at all.”

In one case, according to a provided testimony, a prisoner had four fingers sliced off several years ago – via a “metal cutting machine” – and was immediately sent to hospital and transferred back to the cells a few days later. A year after the bandage was removed, the stump was so infected that his wrist was “locked and immobile.”

“Most of these things happen to the poor people of the society because of poverty. They have no connection with the world news agencies,” the source continued. “The media inside Iran also do not cover the news. Every once in a while, they cover the news for the terror of the society.”

Adding to the controversy is the role played by physicians. Iranian law requires the presence of a physician to assess and enforce the punishments.

The requirement drew a protest in 2020 from the World Medical Association, which in a letter to the Iranian regime called for an end to “these appalling acts of cruelty,” and declared its support for any Iranian physician refusing to “participate” in carrying out the sentences.

(Hollie McKay is a war reporter and geopolitical specialist, and author of the newly-released “Only Cry for the Living: Memos from the ISIS Battlefield.”)