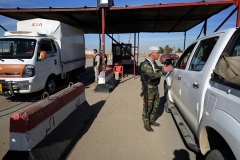 A PMF fighter mans a checkpoint in Bartalla, near Mosul. (File photo by Ahmad al-Rubaye/AFP via Getty Images)

(CNSNews.com) – Pope Francis’ perilous pilgrimage to Iraq this week, due to start on Friday, may cast light on the painful plight of Christians in their ancestral homeland, yet the most significant threat facing the community is neither Sunni terrorists nor corrupt government persecutors, but the heavy hand of neighboring Iran and the proxy militias it funds and arms.

It has been more than three years since ISIS was territorially erased from Iraq’s map. But before the dust could settle, the Tehran-backed Popular Mobilization Forces (PMF) took advantage of the power vacuum to take over checkpoints, weapons arsenals, institutions, and critical roads formerly in ISIS hands.

And their prowess is only increasing.

“The Iranian backed Popular Mobilization Units (PMF) were influential in the fight against ISIS and in removing ISIS from its territorial hold over the Nineveh Plains,” said International Christian Concern (ICC) president Jeff King. “The problem is, the PMF has not left Nineveh and Iran insists on maintaining a stronghold across Iraq.”

Before the U.S.-led invasion in 2003, roughly 1.5 million Christians lived in Iraq. (A 1987 census recorded 1.4 million Christians.) Shaken by the impact of war and al Qaeda-driven brutality, numbers dropped over the ensuing years. With the onslaught of ISIS in 2014, and its mandate that “infidels” pay a tax or be killed, the flight abroad of Christians reduced the size of the community to fewer than 200,000 people. With Tehran’s leverage increasing and a still-unstable security situation, many have refused to return.

“Iran's role in the region has become clear to everyone. They use their Shi’ite militia and implement whatever they want. No one can stop them,” lamented Fr. Afram al-Khoury Benyamen of St. George’s church, a 136-year-old church on the periphery of Mosul. “As long as the regime in Iran uses its militia, Iraq will not be stabilized.”

The mostly-Shi’a PMF is accused of documented abuses including seizing property, occupying towns and villages they credit themselves for liberating, and carrying out revenge killings against anyone perceived to be connected to ISIS.

A school wedged among olive groves in Bartella, a Syriac Christian village outside Mosul, was unceremoniously “re-named” after Ayatollah Ruhollah Khomeini, with the ribbon-cutting ceremony attended by Iran’s consulate-general based in Erbil. Posters of the Virgin Mary at checkpoints were ripped down and replaced with images of Khomeini and his successor, supreme leader Ayatollah Ali Khamenei.

“Now, if you visit it, you will find Shi’ite flags flying on its markets, especially on their religious occasions,” said Benyamen of Bartella. “These appearances make the Christian feel that he has no place in the country and think of emigration.”

According to King of ICC, the militias regularly extort and harass those who go through their checkpoints, but minority Christians are especially vulnerable.

According to analysts on the ground, the strategy goes beyond acts of intimidation.

Steven Nabil, an Assyrian journalist and Iraqi-American, said Tehran asserts its influence politically, winning over Christian representatives and parliamentary candidates as a ruse to cement its iron fist from the top down. In recent years the takeover has been steady and calculating, he said, as Iran builds a support base within Christian communities to slowly gain economic advantages and even several Iran-friendly lawmakers.

The slain Iranian Qods Force commander Qassem Soleimani personally led the missions to curry favor with the embattled Christian minority, said Nabil. This also gave him, and the PMF under his tutelage, access to the “Shi’ite Crescent” – an Iranian sphere of influence stretching across Iraq, Syria and Lebanon, from where it can position itself as a direct threat to Israel.

To realize such a land bridge, Iran has had to take over – by force or friendly coercion – parcels in the Christian-dominant Nineveh Plains. Given that many Christians have abandoned their properties, the task is a relatively smooth-sailing one for the regime next door.

Iran’s inroads in the area have come mostly at the behest of the Babylon Brigade, a militia affiliated with the Tehran-founded Badr Organization – formerly the Badr Brigade, and also a member of the PMF.

Headed by former Iraq transportation minister Hadi Al-Ameri, Badr has placed Christian figureheads in the Babylon Brigades for optics purposes, but its ranks include Shi’ites and minority Shabak.

Adding further to Christians’ fears about a safe future, the PMF retains the support of Baghdad’s central government, which folded the controversial forces into its security apparatus and payroll during the ISIS onslaught.

“The demographic change has become very clear,” said Benyamen. “Young people do not find work opportunities, especially after they complete their university studies, as it goes to students who belong to these [favored] parties.”

“There is no salvation for Iraqi Christians as long as Iran is in the arena.”