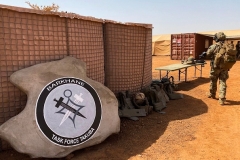 At a military base in Menaka, eastern Mali, the logo of the new France-led Barkhane Task Force Takuba mission. (Photo by Daphne Benoit/AFP via Getty Images)

Paris (CNSNews.com) – The deaths of three more French soldiers in the Sahel come at a time when President Emmanuel Macron is reportedly considering reducing the number of troops involved in the anti-jihadist mission, and as some in the region are calling for dialogue with radicals rather than a military solution.

Macron’s office announced on Monday that three soldiers belonging to Operation Barkhane were killed in central Mali when an improvised explosive device destroyed their armored vehicle. The latest deaths bring to 47 the number of French soldiers killed in the Sahel since 2013.

Macron said France was determined to continue the fight against terrorism in the G5 countries – Mauritania, Chad, Mali, Burkina Faso and Niger – where the operation has been underway since 2013.

Following a military coup in Mali over the summer, the new transitional regime freed 200 jihadists who had been captured by France. Early this month the country’s transitional prime minister, Moctar Ouane, told French media more Malians today favor dialogue with terrorists, since a military solution seems out of reach.

While they acknowledge the Barkhane forces had dealt severe blows to armed extremists, killing or capturing leaders and hundreds of fighters, they were not convinced of their ability to improve security or to build the national army into a force strong enough to stand up to these groups.

France doesn’t oppose negotiations between authorities in the Sahel and certain jihadist elements, with the exception of al-Qaeda and ISIS.

Macron early this year increased the size of the force in Africa by 600 troops, reaching a total of 5,100. Now he is reported to be considering reducing the number again, by 500-600 soldiers.

The question of the future of Operation Barkhane has been raised more frequently during meetings with defense chiefs at Macron’s office, according to media reports, especially after Mali released the jihadists in October.

André Bourgeot, director of research at the French National Center for Scientific Research and a Mali specialist, told French television this week that Barkhane operations in Mali have been largely unsuccessful since 2013, with jihadist groups spreading their influence through the country and beyond. He said a gradual reduction of troops has been under consideration for months, but that France needs time to train national forces to effectively fight jihadists.

But a lawmaker from Macron Republic In Motion party, former military officer Jean-Michel Jacques, said despite the latest fatalities the situation in Mali is improving.

This year France has won some support from other European nations for its effort in the Sahel. An embryonic mission of special forces, mostly from Sweden, Estonia, Czech Republic and France, has been set up. Task Force Takuba, eventually to comprise some 500 troops, will advise and support Malian conventional combat units. It falls under the command of Operation Barkhane.

“France is no longer alone in the Sahel,” said Jacques. “There are now European special forces who fight together within the Takuba force, to strike blows at armed terrorist groups.”