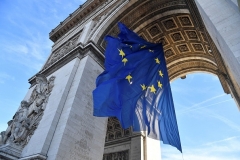 The European Union flag flies under the Arc de Triomphe in Paris on New Year’s Day 2022. Photo by Alain Jocard/AFP via Getty Images)

Paris (CNSNews.com) – The beginning of France’s six-month presidency of the European Union was overshadowed at the weekend by a row over a decision to fly the E.U. flag at one of the country’s most iconic monuments.

President Emmanuel Macron flew the large blue and gold E.U. flag at the Arc de Triomphe in Paris and ordered that it and several other monuments across the country be illuminated in blue, the symbolic color of the E.U., for a week.

Amid an angry reaction from opposition lawmakers on the right and left, the European flag was removed from the famous monument less than two days after it was hoisted.

The government denied that it was taken down early, however, saying it was only ever intended to be flown at the Arc de Triomphe for a short time.

“The government has been forced to withdraw the European Union flag from the Arc de Triomphe,” she tweeted. “Thanks to the massive mobilization of all lovers of France and the Republic to roll back Emmanuel Macron.”

Earlier, Le Pen had called the flying of the European flag a provocation and an offense to “those who fought for France.”

The Arc de Triomphe honors soldiers and civilians who fought and died for France in the Revolutionary and Napoleonic Wars. Beneath it lies the Tomb of the Unknown Soldier from World War I.

Center-right Republican presidential candidate Valérie Pécresse told RTL radio on Monday that Macron has “a problem with the history of France,” recalling too a controversy over his statements when running for the presidency in 2017 that France’s colonization of Algeria was a “crime against humanity.”

Pécresse had earlier demanded that the French flag fly along the E.U. flag at the Arc de Triomphe.

“Presiding over Europe yes, erasing French identity no!” she tweeted on New Year’s Eve. “I solemnly ask Emmanuel Macron to restore our tricolor alongside that of Europe under the Arc de Triomphe. We owe it to all our fighters who shed their blood for [France].”

Jean-Luc Mélenchon, president of the leftist Rebellious France movement, said in response to reporters’ questions that he too was shocked over the flying of the E.U. flag at the monument.

“President Macron decided on his own and without asking anything from anyone,” he said. “There is still a protocol which prohibits flags without the national colors.”

Communist lawmaker Fabien Roussel told Europe 1 radio it was “regrettable” that Macron and his government “have chosen to erase and withdraw the French flag under the Arc de Triomphe, symbol of the nation, of these women and men who fought for France.”

For the next six months France holds the rotating presidency of the Council of the European Union, for the first time since 2008.

Macron has outlined as his priorities for the presidency stronger controls of the bloc’s external borders, action on climate change, gender equality, the establishment of a new partnership with the African continent, and better supervision of major Internet platforms.

Some experts are skeptical about how much he will achieve, given the need to focus on his bid to win re-election in April.

“Macron will face a lot of pressure to deliver after having ramped up expectations,” said Sebastien Maillard, director of the Paris-based think-tank Jacques Delors Institute.