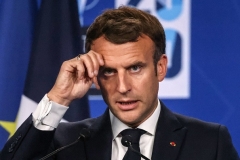 Paris (CNSNews.com) – Amid the continuing kerfuffle in France over a U.S. plan to provide Australia with nuclear-powered submarines, some lawmakers on the left and right are questioning the point of membership in NATO, an alliance which French President Emmanuel Macron two years ago described as “brain dead.”

The U.S.-Australia arrangement, which also involves Britain in a new Indo-Pacific-focused tripartite security pact known as AUKUS, has seen Australia cancel a 2016 contract to buy conventionally-powered submarines from France.

The AUKUS announcement sparked a serious diplomatic rift between France and the U.S., with Foreign Minister Jean-Yves Le Drian recalling the ambassador from Washington – for the first time ever – and accusing the U.S. of stabbing France, a NATO ally, in the back.

Reacting on Twitter to the episode, Bastien Lachaud, a lawmaker with the leftist Rebellious France party, noted that its leader, Jean-Luc Mélenchon, “has been saying for years that we must get out of NATO and out of our dependence of the USA.”

“The strong signal that France should send today is to leave NATO’s military command, and show that France needs to regain its independence in its defense and foreign policy,” remarked Communist Party leader Fabien Roussel.

(In 1966 then-President Charles de Gaulle withdrew France from NATO’s integrated military command, a decision that was only reversed in 2009.)

On the far-right, National Rally leader Jordan Bardella said the episode should “awaken the French.”

“We must question our membership in NATO, without being naïve,” he said. “We have sometimes divergent interests with the United States and that is normal.”

“Macron was right when he said that NATO was brain dead,” Bardella said. “We must draw conclusions. We must give France back its means of freedom and defense by leaving NATO.”

NATO was established in 1949 to counter Soviet aggression. Macron’s much-quoted "brain dead" comment came as he questioned the point of the alliance in the post-Cold War era, amid a controversy over President Trump’s decision to withdraw troops from northern Syria ahead of a military operation by Turkey, also a NATO member.

Macron now plans to hold a Defense Council meeting focused on the submarine episode. The Defense Council, chaired by the president, involves the interior, defense, and foreign ministers and security and military chiefs.

“NATO has initiated a reflection, at our request, on its fundamentals,” he told media organizations. “At the next NATO summit in Madrid [in 2022] there will be the culmination of a new strategic concept. Obviously, what has just happened will have to be discussed.”

The chairman of NATO’s Military Committee, Admiral Rob Bauer of the Netherlands, played down the seriousness of the rift for the alliance.

“There might be implications or consequences as a result of this agreement but I don’t foresee for the moment it will have an impact on the cohesion within NATO,” he told reporters in Athens, where the committee – which advises the alliance on military policy and strategy – held a conference at the weekend.

Meanwhile some French politicians are calling for an official inquiry to determine who was at fault for the affair, criticizing the government for not foreseeing the possible loss of the huge submarine contract.

Hélène Conway-Mouret, a Socialist senator, said there had been signs for months that “the Australians were not happy about the delays and the additional costs” relating to the contract with France.

Republican lawmaker Philippe Juvin told France Info TV that he favors an inquiry into how the development occurred without French knowledge.

“We are losing jobs and we are losing influence in the Indio-Pacific region,” he said. “So now what do we do? We draw consequences. France must regain its autonomy and independence.”

“The president looks forward to speaking with him, to reaffirming our commitment to the partnership, the longstanding alliance, and to continuing to work together on a range of important issues, including security in the Indo-Pacific,” she told reporters on Air Force One as Biden returned to Washington from New York City.

(Patrick Goodenough contributed to this report.)