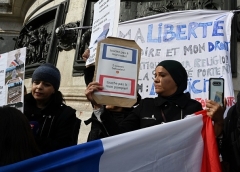 Paris (CNSNews.com) –  At a time of new tensions surrounding Muslims in France, the country’s Senate on Tuesday approved legislation prohibiting parents who accompany children on school trips from wearing any religious symbols, including Muslim headscarves.

Headscarves and other religious garb have been banned in French public schools and government offices since 2004, and the new amendment seeks to extend the ban to people who participate in activities related to education, such as field trips.

Earlier this month, at a meeting of a regional council in Burgundy, south of Paris, a member of the far-right National Rally party demanded that a mother accompanying children on a school trip remove her headscarf or leave the chamber.

“The lady has the right to keep her headscarf at home and in the street, but not here, not today,” said Julien Odoul, before he and other National Rally members walked out.

After a video clip of the incident circulated widely a number of politicians condemned his remarks,. Odoul said afterwards he had no regret about speaking against what he considers as a “communitarian” provocation – a reference to the view that some migrant communities segregate themselves in a way that hinders successful integration.

During the debate in the Senate, Education Minister Jean-Michel Blanquer said a ban was not necessary and was in fact counterproductive because it sends an unwelcoming message to families whom the authorities are trying to bring into the school system.

Numerous families in what the government calls “difficult” neighborhood do not want their children to attend public schools because religious, especially Muslim, requirements are not taken into account – for instance cafeterias do not offer halal food or girls wearing headscarves can be badly treated.

Hourya Bentouhami, a senior lecturer in political philosophy at Jean-Jaurès University in Toulouse, told a French daily this week that Muslim women wearing the headscarf are “harassed in all public or private spaces, beaches, restaurants, businesses and so on.”

She said there was “a real disgust towards the visible manifestations of a religion wrongly considered as foreign.”

The bans also cover other worn items, such as Jewish skullcaps or large crucifixes, but Muslim headscarves and other garb are in the spotlight.

In a recent Ifop survey for the weekly Journal du Dimanche, 61 percent of respondents said they view Islam as incompatible with the values of French society.

To become a law, a bill must be approved by both chambers of the legislature. French President Emmanuel Macron’s Republic In Motion movement has a majority in the lower house and as it opposes the amendment, it will likely not pass.

There are an estimated 5.7 million Muslims, accounting for 8.8 percent of the French population, today.

On Monday, an 84-year-old former member of the National Front fired shots at two Muslims who confronted him as he tried to set fire to a mosque in southern France. He was arrested and charged with attempted murder, although police have yet to comment on motivation.

Macron, who met with members of the French Council of the Muslim Faith (CFCM) at the Elysee Palace the same day, condemned what he called an “odious attack,” saying France would never tolerate hatred and “everything will be done to protect our compatriots of Muslim faith.”

After the meeting, Macron called on the CFCM to take a clear stand on the headscarf issue, “to stop any ambiguity that nourishes Muslim radicals.”

Asked last week about his view on women wearing headscarves in public places and schools Macron did not give a firm answer. He has said, however, that while he opposes the Senate bill he is also opposed to “communitarianism.”