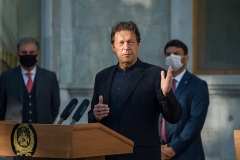 Paris (CNSNews.com) – The controversy over Mohammed cartoons in European media outlets shows no sign of easing, with a radical Islamist party in Pakistan demanding that the government withdraw its ambassador from France and back a boycott of French products.

Tehreek-i-Labbaik Pakistan has persuaded the government to present a resolution to parliament on expelling the ambassador. It will be debated on Friday.

Pakistan Prime Minister Imran Khan is trying to quell the anger of the small but influential party. In a television address this week, he said he would lead a campaign of Muslim-majority countries aimed at convincing the West – including by threatening consumer boycotts – that blaspheming Mohammed should be banned.

Muslims must explain why caricatures of the prophet hurt them, he said.

“When 50 Muslim countries will unite and say that if this happens in any country, then we will launch a trade boycott on them and stop buying their goods, that will have an effect.”

Khan contrasted the publication of such cartoons – on the basis of exercising freedom of expression – with Holocaust denial, which is banned in some European countries.

He also warned radical groups including the TLP that violence would only harm the country, and said he doubted that demanding the departure of the French ambassador would “make any difference to France.”

Tensions came to a peak on Sunday when 11 police officers were seized by anti-France protesters in Pakistan’s second largest city, Lahore. Interior Minister Sheikh Rashid Ahmed announced on Monday that after hard-fought negotiations the hostages had been released.

Demonstrations against France erupted last October when French President Emmanuel Macron defended the right to caricature Mohammed after a teacher, Samuel Paty, was beheaded by a radical Islamist after using such images in a school lesson about freedom of speech.

At a memorial for Paty, Macron declared that people have the freedom to caricature any and everything, including religious figures.

Since then, a campaign against radical Islam has advanced in France. A bill against “separatism” is under discussion in parliament and numerous actions have been taken to control radical Islamism, with authorities closing some mosques and Muslim associations.

Meanwhile the Pakistani authorities have tried to rein in TLP, declaring it a banned organization and arresting hundreds of militants during clashes with police. On Monday TLP leader Saad Rizvi was arrested in Lahore, although no criminal charges have been brought against him.

Explaining the banning decision, Khan said on Twitter that the government “only took action against TLP under our anti-terrorist law when they challenged the writ of the state and used street violence & attacking the public & law enforcers. No one can be above the law and the Constitution.”

Pakistan, a country where blasphemy against Islam carries the death penalty, has been a leader in a decades-long push by Organization of Islamic Cooperation (OIC) countries to have the “defamation” of religion outlawed at U.N. forums.

Last December Khan proposed a new resolution at the U.N. in New York which he said aimed to raise awareness about Islamophobia and the defamation of religious personalities and symbols. But although it passed by 90 votes to 0, more than half of the U.N. membership either abstained or did not vote.

Last February the French foreign ministry in a bid to quell anti-French sentiment abroad said in a statement that the bill against separatism being discussed in parliament “does not contain any discriminatory provisions, in accordance with our Constitution and our international commitments.”

Trade between France and Pakistan amounted to $ 1.5 billion in 2018, the latest available figure.

In Pakistan, Where ‘Blasphemy’ Brings Death Sentence, PM Urges an End to ‘Attacks on Islam and Our Prophet’ (Oct. 30, 2020)