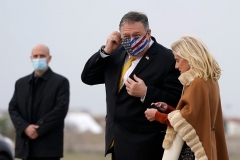 Secretary of State Mike Pompeo, standing alongside U.S. Ambassador to France Jamie McCourt, prepares to board a plane in Paris for Istanbul on Monday. . (Photo by Patrick Semansky/Pool//AFP via Getty Images)

Paris (CNSNews.com) – Secretary of State Mike Pompeo met briefly on Monday with French President Emmanuel Macron, an encounter French media characterized as awkward, since Macron was among the first heads of state to call and congratulate Joe Biden after the election. Pompeo has been mildly reproving of foreign leaders recognizing an election outcome not yet accepted by President Trump.

The Elysee palace called the meeting “a courtesy visit.”

“Mike Pompeo remains in charge until January 20,” said a diplomatic source, speaking off the record to media outlets.  “It is therefore normal – and respectful of American institutions – to receive him.  All subjects will be discussed, those the two countries agree on and those they disagree on.”

Last week, Pompeo was asked during a Fox News interview if he thought it was inappropriate for foreign leaders to be contacting Biden. “If they’re just saying ‘hi,’ I suppose that’s not too terribly difficult,” he replied. “But make no mistake about it: We have one president, one secretary of state, one national security team at a time. It’s appropriate that it be that way.”

The meeting with Macron came after more substantive talks with Pompeo’s French counterpart, Foreign Minister Jean-Yves Le Drian, with U.S. plans to withdraw all forces from Afghanistan, and sanctions against Iran, among the more sensitive items on the agenda.

No press briefings were held after the talks, but ahead of the meeting, Le Drian said he would lay out France’s opposition to an accelerated withdrawal of American troops from both Afghanistan and Iraq. France fears the pullout could jeopardize the fight against Islamist terrorism.

Trump said last month he would like all U.S. troops to be out of Afghanistan by Christmas, which is faster than expected under an agreement signed between the U.S. and the Taliban last February. “In our opinion, we shouldn’t do it,” Le Drian told reporters earlier. “And we shouldn’t do it in Iraq either.”

The U.S.-Taliban agreement saw the U.S. undertake to reduce the number of troops from around 12,000-13,000 to 8,600 by July of this year – a target that was met – and then to zero by April 2021, on condition that the Taliban meets specific commitments, including entering into negotiations with the government and severing links with al-Qaeda.

Last September, the U.S. reduced the number of troops in Iraq from 5,200 to 3,000, and Trump wants to withdraw all of them. France, a member of the U.S.-led anti-ISIS coalition, has 200 soldiers in Iraq, most of them training the Iraqi army. It intends to keep them there, and would like to see the U.S. remain as well.

Other issues discussed, according to Le Drian, included “Iran, terrorism, the Middle East, [and] the question of the relationship with China.”

France is a party to the Obama-era Iran nuclear deal, the Joint Comprehensive Plan of Action, and was critical of Trump’s decision to withdraw from it in 2018 and reinstate sanctions against the Iranian regime. With the other JCPOA parties, Paris hopes to see the U.S. return to the deal under a Biden administration. Biden campaign policy advisor Tony Blinken said earlier this year that Biden as president would return to compliance with the agreement if Tehran did, but would also look to partners to support efforts to “negotiate a longer and stronger deal.”

In a brief readout of the meeting with Le Drian, State Department spokesman Cale Brown said the two men had “emphasized the importance of the transatlantic alliance and our shared goal of NATO unity,” and “stressed the significance of political reconciliation in Libya under a U.N.-led political process.”

“The Secretary discussed our strong alliance in countering the Chinese Communist Party’s malign activity in Europe and human rights abuses in Xinjiang,” Brown said. “Secretary Pompeo also discussed the need to combat violent extremism and highlighted Hezbollah’s malign influence in Lebanon as well as U.S. efforts toward a stable and reform-focused government there. The Secretary and the Foreign Minister underscored our joint efforts on democracy, security, and prosperity in the Sahel.”

Brown said that at Pompeo’s meeting with Macron, the two “discussed significant threats to global security, efforts to counter violent extremism, Iran’s destabilizing behavior, and Hezbollah’s malign influence in Lebanon.  The Secretary stressed the importance of the transatlantic alliance and NATO unity and highlighted our strong cooperation in the Indo-Pacific region, as well as efforts to counter the Chinese Communist Party.”

France is the first stop in a ten-day trip that will take Pompeo to Turkey, Georgia, Israel, the United Arab Emirates, Qatar, and Saudi Arabia.

Before meeting with Le Drian and Macron, Pompeo paid tribute to the victims of recent Islamist terror attacks in France.