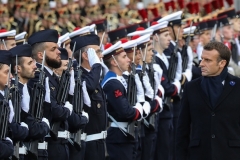 (CNSNews.com) – For the second time in less than a month, France has being roiled by the publication of an open letter by members of the armed forces, criticizing the government for what they call “concessions” to Islamism.

Unlike the earlier one, the column published in the right-wing magazine Valeurs Actuelles appears to have been written by serving, rather than retired, military personnel.

On Tuesday the army chief of staff, General Francois Lecountre, said in a letter to all personnel that those behind the letter should quit.

“The most reasonable step is certainly to leave the institution in order to freely express their ideas and convictions,” Lecountre wrote.

The latest column is even stronger than the first one, which appeared in the same publication in April. The writers, who do not identify themselves, wrote, “We see hatred for France and its history becoming the norm,” and warned that “civil war is brewing.”

The writers described themselves as soldiers from the so-called “generation of fire” which have seen active service – including men and women, of all ranks and branches of the service.

“In Afghanistan, Mali, Central African Republic or elsewhere, a number of us have experienced enemy fire. Some have left comrades there,” they wrote, in words directed at French President Emmanuel Macron.

“They offered up their lives to destroy the Islamism that you have made concessions to on our soil.”

The soldiers also referred to their involvement in Operation Sentinel, the deployment of 10,000 soldiers and 4,700 police and gendarmes in the aftermath of the January 2015 terrorist attacks, aimed at protecting sensitive sites against terrorism.

The writers expressed their support for the signatories of the April letter. In that column, retired generals and senior rank officers criticized the government over what they saw as a lax approach to immigration and social unrest, voicing concern about a threat to French values.

The latest column brought strong criticism from the left, but Republicans and the far-right National Rally voiced support for the sentiments expressed.

“The soldiers’ diagnosis is perfectly correct and based on field experience,” commented François-Xavier Bellamy, a Republican member of European Union, while another Republican lawmaker, Julien Aubert, said, “Instead of seeking to sanction, the government must be clear about the state of the country.”

Macron himself has not commented publicly on either column, but lawmakers in his Republic in Motion movement denounced what they see as a political conspiracy, timed just weeks before local elections and one year before the next presidential election.

The leader of the leftist movement Rebellious France, Jean-Luc Mélenchon, called those who wrote the column “seditious” and cowardly for hiding behind anonymity.

“I am not afraid to say what I will do if I am elected president: purge the army of its seditious members,” he said.

The soldier said they wrote the column anonymously since they are in active duty and are forbidden to take political positions openly.

Expressing concern about the rise of crime and violence in French towns and suburbs, they urged decision-makers to act quickly to guarantee “the survival of our country threatened by an imminent civil war.”

They also voiced concern about “communitarianism” becoming evident and commonplace across French society.

“Communitarianism” refers here to the phenomenon of migrant communities segregating themselves, at the cost of integration into wider French society.