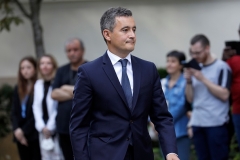 Paris (CNSNews.com) – Under fire over the appointment of a senior government minister who is facing an unresolved allegation of rape, French President Emmanuel Macron on Tuesday defended his choice, citing the presumption of innocence and saying no-one should be “the victim of a judgment by the street and by social [media] networks.”

“If someone who is under an accusation cannot have political responsibility, our democracy changes its nature. It becomes a democracy of opinion,” he said in a Bastille Day media interview.

“You know that I want the best for our country. I do not want the worst of Anglo-Saxon society,” he added.

Macron said he respected the views of women’s organizations who are unhappy about the appointment of Interior Minister Gerald Darmanin, given the nature of the allegations against him.

Darmanin denies accusations of rape, filed in 2017 by a woman who says the assault took place in 2009, when Darmanin was a young lawmaker. In a 2018 hearing he acknowledged that he had had sexual relations with Sophie Patterson-Spatz, but said it had been consensual, and at her initiative.

The complaint was dismissed on three occasions for technicalities, but last month the Paris Court of Appeal ordered the investigation to be resumed.

Women’s groups have expressed concern that Darmanin – whose position places him in charge of the law enforcement agencies – or newly-appointed Justice Minister Eric Dupond-Moretti may use their positions to try to stop the case from proceeding.

Reacting to Macron’s remarks, Socialist Party leader Oliver Faure said in a radio interview that while the presumption of innocence must be guaranteed, “we must also guarantee fairness and balance between the parties” in a criminal complaint.

“How do you want to have a balance between the parties when one becomes minister of the interior, and will be able to get all the feedback on the investigation, and [the other is] a woman who is insulted by the head of state who supports the former?”

David Cormand, a member of the European Parliament for the Greens, told the C-News television channel that, “At one time, when somebody was accused [of a crime] he left the government to defend himself. But today, he is promoted. This is a terrible message to send to all the victims who file complaints.”

Caroline de Haas, a feminist activist and Socialist politician accused Macron of trying to present Darmanin as the victim, calling it “an inversion of guilt.”

She said Macron in his remarks had “used all the stereotypes that we hear when we [women] file a complaint for violence.”

Darmanin was named as part of a government reshuffle under new Prime Minister Jean Castex, as was incoming Justice Minister Dupond-Moretti, whose appointment has also angered women’s groups.

Dupond-Moretti, a high profile lawyer, has made provocative comments about the #MeToo movement, referring to “the crazy women who crucify men on social media,” and dismissed as a joke a law passed in 2018 outlawing catcalling.

He is also unpopular among judicial officials, as a result of his criticism of the way France’s legal system operates – and particularly what he sees as unhealthily close relationships between judges, prosecutors and the justice ministry.

“To designate [as justice minister] such a person who despises magistrates to such an extent is a declaration of war on the judiciary system,” said Céline Parisot, president of the USM, the main union for magistrates in the French judicial system.

Socialist lawmaker Laurence Rossignol called the appointment of the two men a “slap in the face for everyone campaigning against gender-based violence.”

“It’s a very big problem, especially because neither of the two has made a public commitment to tackling such violence,” she said.