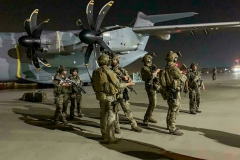 Paris (CNSNews.com) – French special forces troops and members of an elite police unit this week escorted “several hundred people” from the French Embassy in Kabul, where they had sought shelter, to the Kabul airport three miles away.

Providing basic details on the sensitive operation in the Taliban-controlled capital, Jean-Baptiste Dulion, the head an elite tactical unit of the French National Police known as Raid, said 11 members of the unit, accompanied by some French special forces soldiers, had carried out the mission on Tuesday night.

“We took all measures to secure our convoy, to have the best possible transport to the airport, with armored vehicles and external buses that we secured, so that many Afghan nationals embarked safely.”

They included French nationals and Afghans who had sheltered at the embassy as Taliban fighters approached the capital late last week.

Dulion said the unit had, of necessity, coordinated with the Taliban. There had been “two levels of negotiations” he said, involving the French ambassador and the Taliban at a senior level, and “us in the field” with local representatives to ensure safe passage to the airport.

The evacuated people were flown on a French A400M military transport aircraft from Kabul airport to a French military base in the United Arab Emirates, and then on to Paris.

The French government said the evacuation of diplomats, expatriates and Afghans who worked with the French army during the French deployment in Afghanistan, was accelerating.

“Repatriations from Kabul will continue as much as possible in the next days,” Foreign Minister Jean-Yves Le Drian said on Wednesday night when the second flight arrived.

“We owe this to you,” French President Emmanuel Macron wrote on Twitter, welcoming the aircraft’s arrival.

French troops were deployed in Afghanistan from late 2001 with as many as 4,000 troops stationed there in 2009 as part of the NATO-led International Security Assistance Force (ISAF). Eighty-nine soldiers were killed during the mission.

When the ISAF was replaced by NATO’s Resolute Support mission in 2012, French troops were withdrawn, with just a small logistics contingent left in place.

Most of the Afghans who formerly worked with French forces had been evacuated since May.

Macron’s office said nearly 800 people who worked with French organizations between 2001 and 2014 have already arrived on French soil. Between May and July 2021, 625 people who worked for the French Embassy in Kabul, including employees and family members, were welcomed in France, it said.

A group of journalists who work or have worked in Afghanistan asked the government to charter a plane for another 145 Afghans targeted by the Taliban.

“We call on President Macron to authorize these 145 people seized by dread and terror to land in France,” they wrote in a statement published by Franceinfo. “Otherwise, they will live in hiding in Afghanistan or simply disappear.”

Afghan nationals who have arrived in France this week are being cared for by a government migration office and a non-governmental organization. Details of their whereabouts have not been released.

Health authorities said those not vaccinated against COVID-19 were being quarantined and vaccinated.