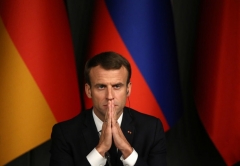 Paris (CNSNews.com) – Homeschooling of Muslim children and the appointment of foreign-trained imams will be prohibited under controversial proposals announced by French President Emmanuel Macron, who says changes are needed to prevent an erosion of the country’s tradition of secularism.

Unveiling his plans during a visit to an area north of Paris with a large immigrant population,  Macron said “Islam is a religion in crisis all over the world,” and spoke of a need to develop an “Islam of the Enlightenment,” compatible with French secularism and free from foreign influence.

His proposals to tackle “separatism” in French society will be presented to parliament in early December, with the aim of becoming law before the next presidential elections in April 2022.

--School will become mandatory from the age of three, with only those with medical conditions allowed to be educated by parents at home.

--Islam and the Arabic language will be taught at schools to all children, overseen by a foundation to be created with government funding for the purpose.

--Imams working in France must be trained in France – by the French Council of Muslim Worship (CFCM), an association launched in 2003. Currently many imams preaching in French mosques come from countries like Morocco, Algeria and Turkey. The CFCM will have six months to come up with a plan on supervising imams, with the goal of ensuring that within four years all imams working in France will have been trained in France.

Macron criticized some associations – without naming them – which he said sometimes promote ideas contrary to the values of France while teaching Arabic language and Islam.

“Any association requesting a subsidy from the state or from a local authority should sign a contract to respect the values of the republic which will be a kind of a charter of secularism,” he said.

While highlighting the French secular tradition known as “laicite,” Macron also cautioned against anti-Muslim sentiment, warning citizens not to “fall into the trap laid by extremists, whose goals are to stigmatize all Muslims.”

The proposals have drawn mixed reaction, with the Turkish government among those criticizing them.

“Nobody should try to subject our sacred religion, which means ‘peace,’ to wrong and distorted approaches under the pretext of ‘enlightenment,’” the Turkish foreign ministry said in a statement, charging that the proposals would “further fuel the growing xenophobia, racism, discrimination and Islamophobia, that are major problems in Europe and in France.”

At home, Amar Lasfar, head of the Union of Islamic Organizations of France, told Reuters he was not sure that a new law was needed, and expressed concern that Macron’s choice of words could have the effect of stigmatizing all Muslims.

Yasser Louati, a French Muslim activist who focuses on Islamophobia, tweeted: “The repression of Muslims has been a threat, now it is a promise. In a one hour speech #Macron buried #laicite, emboldened the far right, anti-Muslim leftists and threatened the lives of Muslim students by calling for drastic limits on home schooling despite a global pandemic.”

Manon Aubry, a lawmaker with the leftist Rebellious France movement, accused Macron of having spoken about Islam “in an obsessive way” and “stigmatizing Muslims.”

For Republican lawmaker Eric Ciotti, however, Macron did not go far enough. “Few strong and courageous measures,” he tweeted. “Always the same song of social excuse and repentance. The refusal to ban the veil for accompanying persons on school trips is a fault. Nothing on immigration.”

Far-right politician Marine Le Pen, head of the National Rally, also criticized Macron for not raising what she viewed as the main problem – immigration.

France is home to the biggest Muslim community in Europe.  Although collecting data on religion is prohibited in national censuses, according to 2017 estimates there are around 8.5 million Muslims in France, about 3.5 million who practice their faith regularly.