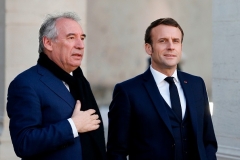 Paris (CNSNews.com) – A French government commissioner is calling for an easing of immigration restrictions to counter an unsustainably low birthrate, stoking debate on a sensitive topic in an election season.

François Bayrou, whose role is to advise on the country’s economic and demographic future, also called in a report for French couples to have more children.

“France would need 40 to 50,000 births per year to ensure the renewal of generations,” Bayrou said in a statement to the AFP news agency.

He said a low birth rate – the lowest in 45 years – is threatening the nation’s social model.

“France undoubtedly needs, even more than its neighbors, a dynamic demography because its social model relies, for many, on solidarity between the generations.”

Bayrou said families should be offered financial help to encourage them to have more children.

In addition, he said, “the contribution of migration can help improve the ratio of active/retirees, and therefore the financing capacity of our social systems.”

Bayrou, whose Democratic Movement (MoDem) is allied to President Emmanuel Macron’s Republic in Motion movement, will present his report to the Senate his week.

His calls for France to open up immigration to compensate for the low birth rate came at a time when questions of immigration and associated security concerns are increasingly in focus, ahead of regional elections scheduled for June, and presidential elections due to be held in May 2022.

With immigration a hot topic through the coming electoral cycle, some experts think Bayrou might have sparked a political problem for his ally, Macron.

A survey by pollster IFOP released on Monday found 71 percent of respondents are opposed to increased immigration – up seven points from a similar survey conducted in 2018. Most felt France has enough migrants and adding more is not desirable.

(Total fertility rate is the average number of babies born to women during the reproductive years of 15-44. Demographers put the generational replacement level at 2.1.)

Bayrou said an additional factor was the coronavirus pandemic. January 2021 births were down by 13 percent from the previous January, he said.

MoDem member Vincent Chauvet, the mayor of  a small town south east of Paris, said he agreed with Bayrou about the need for an increase in migration numbers, but under certain conditions.

“We need workers in some sectors of the economy, like in services, so we need to welcome them,” he said. “A lot of small towns in France, like mine, will be happy to have more migrants coming, working and living there.”

But Jacques Myard, the Republican mayor of a town in suburban Paris, said while he agreed with the need for French couples to have more children, he opposed calls for increased immigration.

“The only solution is to encourage families to have more children through a family policy that has been destroyed by former President François Hollande, and continued by Macron,” he said.

“Distributing family allowances according to family income was a big mistake that should be fixed,” Myard said.

He called for a return to the system that was in place in the 1990s, when women received a public allowance when they gave birth, irrespective of family income.

Data from the National Institute of Statistics and Economic Studies show that 6.7 million immigrants were living in France in 2019, of whom 37 percent (2.5 million) had acquired French nationality. (The rest are either ineligible or choose not to.)