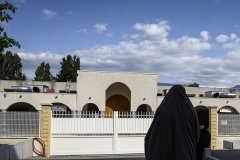 A young woman at a Muslim school in eastern France. (Photo by Jean-Philippe Ksiazek/AFP/Getty Images)

The measure forms part of a broader “anti-separatism” bill, designed to counter radical Islamism in the country, which the lower house passed after 80 hours of debate and the adoption of 144 amendments. The article banning virginity certificates was approved by 112 votes to 1. The Senate will begin discussion on the full bill in late March.

The article prohibits health professionals from performing virginity tests and issuing certificates, with offenses attracting one-year prison sentences and fines of $18,000. Local government officials will be required to interview couples planning marriage – in separate interviews – in cases where absence of free consent is suspected.

An amendment adopted to the original measure will also penalize the so-called “handkerchief ceremony” still practiced in some gypsy communities to demonstrate virginity ahead of marriage.

Support for the measure came from the National College of French Gynecologists and Obstetricians, although some voices in the medical community said it was counterproductive to outlaw what they claim is a rare practice.

Ghada Hatem, a gynecologist who founded a facility to help abused women in a northern suburb of Paris where Muslims are numerous, argued that the certificate “helps some girls fearing reprisals that could lead to death, or brutal examinations outside France if their family demand one before their marriage.”

Hatem does not perform hymen examinations but admitted that she sometimes provides a certificate to a young woman in a bid to protect her from harm, or even save her life.

There are also cases where Muslim parents, unable to obtain a virginity certificate from a gynecologist in France, take daughters back to their country of origin, in Africa, Turkey or the Middle East, where doctors will provide the service. In case where Western-educated gynecologists in these countries refuse to do so, Hatem said, parents will sometimes take girls to individuals who are not doctors, risking grave harm as they examine them.

Arranged or forced marriages also occur in France, especially in some conservative Muslim communities, where there is firm opposition to marrying outside the faith. In such cases, it is usually members of the family circle who encourage or pressure the bride-to-be to obtain such a certificate.

During the parliamentary debate, some lawmakers on the right and left questioned the effectiveness of a measure which they saw as targeting medical professionals rather than individuals such as family members or religious advisors.

Citizenship Minister Marlène Schiappa has long been in favor of the ban.

“It is an important part of the law which concerns human dignity and which is part of the principles of the republic,” she said during a cabinet meeting in December. “With this law it will no longer be possible to establish medical certificates that are unrelated to the health of patients. We believe that in France no woman has to prove her virginity.”

In a recent edition, the Catholic daily La Croix wrote that the broader proposed anti-separatism law “worries all believers,” arguing that it would impact a 1905 law on separation of church and state.

Last fall, Interior Minister Gérald Darmanin said the government’s “role is to allow Jews, Muslims, Catholics and Protestants, all those who believe in God, to practice their religion, but without turning a blind eye to those who place faith above the law.”