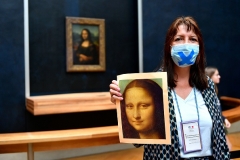 With the Mona Lisa in the background, a Louvre employee prepares to welcome returning visitors this week. (Photo by Aurelien Meunier/Getty Images)

Paris (CNSNews.com) – France’s most famous museum, the Louvre, reopened its doors this week after its longest closure since World War II, but with American and Chinese visitors unable to travel to Europe it remains to be seen how it and other Parisian attractions will fare this summer.

Visitors to the Louvre will have to book in advance, wear masks, and follow social distancing and hygiene recommendations.

It’s the latest facility to reopen after the months-long coronavirus shutdown began to ease in stages from mid-May. The Eiffel Tower reopened to visitors on June 25.

Due to the ongoing pandemic, the European Union (E.U.) has reopened its borders so far to only a selected handful of countries. The United States is not among them, while China was included, but on strict condition of reciprocity.

In 2018, the most recent year for full figures to be available, 10.2 million people visited the Louvre, with foreigners accounting for three-quarters of the total, coming mainly from the U.S., China, and E.U. countries.

The museum lost an estimated 40 million euros ($45.3 million) in revenue as a result of the shutdown, and managers predict three difficult years ahead.

In May 2019, a national tourism council, composed of government ministers, community representatives and tourism sector professionals, announced that the country had received almost 90 million visitors in 2018, in spite of the impact of the “Yellow Vests” protests towards the end of that year.

Following that announcement, the government set the target of 100 million visitors nationally by the end of 2020. But the effects of the pandemic will make that far from possible, tourism industry experts say.

According to Talents Travel, an agency specialized in international tourism, 4.8 million Americans and 2.2 million Chinese visited France in 2018.

Beyond the numbers, Americans and Chinese also represent the higher-spending end of the spectrum of visitors.

In Ile de France alone, Chinese visitors spent $300 million in 2018 on goods that were not consumed locally, such as clothing, perfumes, handbags, or souvenirs, according to data from the Paris Chamber of Commerce.

Americans staying in the Ile de France region, spent around $982 each for an average duration of 5.2 nights, with daily expenses about $188 – compared to daily spending for all international visitors, which averaged $157.

According to Valérie Pécresse, the president of the Ile de France regional council, visitor numbers in the region were already impacted negatively before the pandemic, by strikes and the “Yellow Vest” protests.

Despite those circumstances, she said, the “balance sheet” for 2019 was good.

As for the outlook for the current year, Pécresse was cautious, noting that “uncertainty hangs over activity in 2020.”

Until 2015, France was the third-biggest earner internationally of tourism revenue, after the United States and Spain. It then dropped into fourth place, overtaken by China.

Boosting the industry is one of many challenges facing the government of newly-appointed Prime Minister Jean Castex, in addition to broader economic, social and environmental concerns in the aftermath of the lockdown.

France has recorded more than 200,000 confirmed cases of COVID-19, and almost 30,000 deaths – the third highest death-toll in Europe, after Britain and Italy.