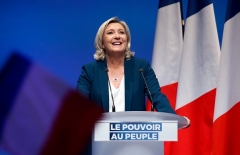 Paris (CNSNews.com) – As French lawmakers began to work this week on a sensitive bill aimed at curbing radical Islamism, far-right National Rally leader Marine Le Pen has renewed calls for a ban on all kinds of veils in public spaces.

Currently, only a full facial covering is prohibited in public places under legislation enacted in 2010, while the wearing of conspicuous religious symbols was banned in public schools under a 2004 law.

“The veil is a militant garment and whoever wears it shows a wish to secede from the Republic,” Jordan Bardella, deputy leader of Le Pen’s party, said during the party’s presentation of their proposals to media representatives, while National Rally senator Stéphane Ravier said the party’s could apply to elected officials who “collaborate with Islamism.”

Le Pen hopes to take advantage of the discussion about the so-called law on separatism, to advance her ideas on radical Islamism. Politicians on the right and left know that the topic could feature prominently in the next presidential election, scheduled for next year.

The drive comes at a time when Le Pen is running closely behind President Emmanuel Macron in opinion polling. The latest Harris Interactive poll, reportedly by Le Parisien daily, put Le Pen at 48 percent to Macron’s 52 percent, with a margin of error of 1.4 to 3.1 points.

The survey found that Le Pen would lead in a first round of voting, with 26-27 percent of the vote when all electoral configurations are tested, while Macron would get 23-24 percent. It also found that, apart from Le Pen, no other candidate, left or right, would receive sufficient support to reach a second-round runoff against Macron: Of likely contenders, the best-achieving Republican, lawmaker Xavier Bertrand, would obtain 16 percent, leftist Jean-Luc Mélenchon would get 10-11 percent, and the socialist Mayor of Paris Anne Hidalgo 6-7 percent.

Le Pen said at a weekend press conference that a victory for her was “plausible,” although she cautioned that a poll is merely a snapshot of a particular moment in time.

In 2017 Macron won a second round of the presidential elections with 66.1 percent, while Le Pen took 33.9 percent of the vote.

The National Rally argues that current policies in place do not comport with the seriousness of observations made by Macron about the dangers of radicalism since he was elected in 2017.

Its draft, drawn up by National Rally member of the European Parliament Jean-Paul Garraud, proposes to outlaw the propagation and circulation of Islamist ideologies, including in films, the media, public libraries, and at schools.

Proposed articles expected to raise particular controversy include one prohibiting the wearing of “Islamist” garb in public spaces, and another relating to mosques.

“We must close the 540 radical mosques which spread hatred on our soil and fight against malicious foreign influences by putting an end to the seconded imams or by blocking foreign funding for mosques,” the party says. There are approximately 2,500 places of Muslim worship in France, and experts have said National Rally’s claims that more than 500 of them are promoting radical ideas are hard to verity.