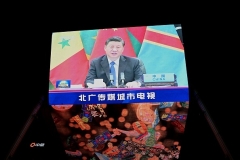 Chinese President Xi Jinping is pictured on a big screen in Beijing during an evening news program as he addresses the China-Africa Forum this week. (Photo by Noel Celis/AFP via Getty Images)

Paris (CNSNews.com) – As China this week stepped up its diplomatic and economic engagement in Africa, Senegalese President Macky Sall urged Beijing to throw its support behind the fight in the Sahel region against Islamist terrorists.

Sall, whose government hosted this year’s annual China-Africa Forum, would like to see China contributing to a campaign led for the past seven years by French troops – Operation Barkhane in five former French colonies in the Sahel – and United Nations peacekeepers.

His foreign minister, Aissata Tall Sall, said in remarks at the opening of the forum that Senegal hoped China would provide support for the fight.

“We would like the voice of China, given its influence, to be a strong voice to support Senegal and all countries engaged in the problem of insecurity in the Sahel,” she said after meeting with her Chinese counterpart Wang Yi.

President Sall announced the start of a new era of cooperation between Africa and China, which is already deeply involved in the continent through Belt and Road Initiative (BRI) infrastructure projects.

Addressing the forum by video link, Chinese President Xi Jinping said he was pleased to see more African countries joining the BRI. He promised to boost trade between Africa and China, and to increase imports of African agricultural products to $300 billion within three years.

Chinese officials announced dozens of new projects, in the health, digital and security sectors, but with few details available.

China has become the continent’s largest trading partner over the last 12 years. Vice Commerce Minister Qian Keming announced this month that China-Africa trade reached $185.2 billion between January and September 2021, up 38.2 percent year on year, and a new record for the period.

The China-Africa Forum came shortly after Secretary of State Antony Blinken paid his first visit as secretary of state to Africa, stopping in Senegal, Kenya, and Nigeria.

While in Abuja, Blinken was asked about U.S.-Chinese rivalry in Africa but argued that Africans should not have to choose.

“Our partnership with Nigeria, with many other countries – is not about China or any other third party.  It’s about Africa,” he said. “It’s about working together to make the investments in Africa, make the investments in its people, and ultimately to ensure that across the board we help create the conditions so that there are truly, ultimately African-led solutions to any of the challenges that Africa faces.”

In the case of U.S. investments, he said, “we want to make sure that as investments are made, countries are not labored with tremendous debt that they can’t repay.”

Critics in Africa and elsewhere say Beijing uses major infrastructure projects to increase its influence on vulnerable countries, especially those unable or struggling to honor their commitments.

Concerns around China’s operations have currently arisen in the case of Uganda’s only international airport, Entebbe. China's Export-Import Bank in 2015 granted a $200 million loan for its expansion, but some Ugandan critics are worried that Beijing could take control of the airport if Uganda defaults on the loan. (The government says it has no intention of defaulting on its loan repayments.)

France, which with the U.S. and Britain is still a leading trade and investment partner in Africa, finds itself upstaged by China’s growing presence and activism, in both French- and English-speaking African countries.

“The question is to know which economic model will convince African decision-makers,” Christophe Lecourtier, managing director of Business France – an agency working to develop French companies abroad – said during a France-Africa summit in Paris in October.

“One favors local employment, training, integration into development, in which French companies have serious assets,” he said. “The other is based on the low cost of huge Turkish or Chinese [infrastructure] projects.”

Some African countries are showing a lack of enthusiasm about the growing Chinese influence. In recent years anti-Chinese sentiment and even violence have erupted in Zambia, where some have taken to the streets to protest Beijing’s grip on the country and opposition politicians have used anti-Chinese rhetoric in campaigning.