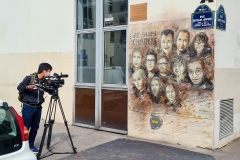 A mural at the Paris offices of Charlie Hebdo pays tribute to the 11 staffers killed in the 2015 terrorist attack. (Photo by Marc Piasecki/Getty Images)

Paris (CNSNews.com) – Ahead of the opening Wednesday of a landmark terror trial in Paris, French Interior Minister Gérald Darmanin warned that the threat of terrorism remains high, and expressed concern about the upcoming release of hundreds of radicals who have served their sentences.

Speaking during a visit to the Directorate General for Internal Security headquarters, Darmanin revealed that 32 terrorist attacks have been foiled since 2017, and 61 since 2013.

Among the attacks that were not thwarted were those on the offices of the satirical magazine Charlie Hebdo in January 2015, followed by the shooting of a police officer and the killing of hostages during a siege at a kosher supermarket. Seventeen people were killed by three terrorists over the three days.

Fourteen alleged accomplices of the three terrorists – who were themselves killed during the attack spree – are due to go on trial in Paris on Wednesday, accused of provided various types of support to the attackers.

Charlie Hebdo was thought to have been targeted because it published cartoons lampooning Mohammed, an action deemed blasphemous by many Muslims.

Marking the start of the trial, the magazine in its Wednesday edition is republishing the cartoons that stoked such controversy 15 years ago – including one drawn by its own cartoonist, Jean Cabut, who was among those killed in the January 2015 attack.

“These drawings are now part of history, and history cannot be rewritten, nor can it be erased,” the magazine said in an editorial on Tuesday.

Darmanin said that 505 French detainees linked to the Islamist movement are due to be freed in the coming weeks, along with 702 common law detainees regarded as being susceptible to radicalization.

Another 45 prisoners serving time for association with acts of terrorism are scheduled for release before the end of the year, followed by another 63 in 2021, he said.

With all ending their sentences, he said, their releases would pose “a major security challenge.”

Darmanin also spoke about the so-called S-list, a confidential list of suspects regarded as potentially dangerous and subject to surveillance by police and intelligence agencies.

He said there were 8,132 people on the list at present, mostly suspected Islamist radicals or Muslims determined to be in the process of radicalization. The list also includes gangsters, anarchists, and others.

The number of people on the S-list (the S stands for State Security) is significantly lower than in was in 2018, when some 20,000 people were reported to have been listed.

People on the list are subject to physical and phone surveillance but only face arrest if they commit a crime, or are suspected to be preparing to do so. The list is overseen by France’s internal and external security agencies, and senior government officials are also able to access it.

Darmanin’s warning about the ongoing threat came at a time when most French people have been more focused on other matters. The Yellow Vest protests, a populist movement drawing attention to a range of economic grievances, erupted in late 2018, and this year has been dominated by the coronavirus pandemic.

Terror will be back on people’s minds this week, however, as the terror begins.

On January 7, 2015, Cherif and Saïd Kouachi – French brothers of Algerian origin – attacked the Paris offices of Charlie Hebdo, gunning down 11 people and a police officer outside, before fleeing.

The next day a friend of the Kouachis, Amédy Coulibaly, killed a municipal policewoman in Montrouge, a town near Paris.

On January 9, the Kouachis holed up in a printing house in a small town east of Paris, where after an eight-hour siege they were shot dead by police as they emerged from the building, firing.

During that siege, Coulibaly seized hostages at a kosher food store in eastern Paris, and reportedly threatened to kill them if the Kouachi brothers were harmed. During the incident he killed four men, all Jews. Coulibaly himself was killed when police stormed the store.

The 14 alleged accomplices going on trial all face sentences, if convicted, of between ten years and life imprisonment.

Three of the accused – Coulibaly’s common law wife Hayat Boumedienne, and brothers Medhi and Mohamed Belhoucine – will be tried in absentia. The three are subject to an international arrest warrant, their whereabouts unknown.

The trial is expected to last two months, with verdicts due to be delivered on November 10.

François Hollande, who was president at the time of the attacks, said in a television interview the terrorists had “lost, because the reaction of the French people was admirable.”

He recalled a huge solidarity demonstration on January 11 of that year, attended by several foreign leaders and more than four million French people.