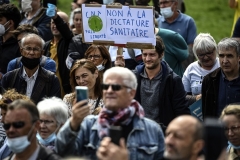 A man holds a placard reading ‘No to a sanitary dictatorship’ during a protest against the mandatory wearing of face masks, in Paris on August 29. (Photo by Christophe Archambault/AFP via Getty Images)

Paris (CNSNews.com) – A new survey indicates that French people who are opposed to wearing masks as a coronavirus safety measure tend to be educated, older women, who hold libertarian or anti-establishment views and are leery about the prospect of having a COVID-19 vaccination, if a vaccine were available.

They also typically have very little trust in French President Emmanuel Macron, according to the survey carried out by political science professor Antoine Bristielle, based on more than 1,000 responses to a questionnaire sent to “anti-masker” Facebook groups.

“Ninety-five percent of them think that the government interferes too much in our daily life, and fifty nine that everyone should be free to do what they want,” he wrote in his conclusion.

Anti-mask activists have held demonstrations in a number of European countries, including Britain, Germany and France

While the numbers on French streets have been small, anti-maskers are active online, according to Bristielle, who is based at Grenoble University in south-eastern France.

In his study, those opposed to wearing masks had different reasons for doing to – they are seen as useless and ineffective in protecting against COVID-19 infection; they could be dangerous because they don’t allow wearers to get sufficient oxygen; they provide a breeding ground for bacteria.

Some of the findings include:

--Sixty-three percent of the anti-mask respondents are women, the average age is 50, with an average education level of at least two years of university study.

--Thirty-six percent of respondents were executives and those in “higher intellectual professions,” compared to 18 percent of the wider French population.

--In the last general election, 18 percent of respondents said they abstained, 14 percent cast blank votes, and 10 percent were not registered to vote.

--Fifty-three percent of respondents expressed trust in hospitals, compared to 87 percent of the French population.

--A majority of respondents held to some common conspiracy theories – for example 52 percent believe Princess Diana was assassinated and 57 percent believe in the existence of a global “Zionist plot.”

Responding to the emergence of anti-mask protests, World Health Organization director-general Tedros Adhanom said in early September governments should listen to and “engage in an honest dialogue” with the protestors.

The survey was published amid a new rise in COVID-19 cases in France, with 4,203 new infections confirmed in a 24-hour period, health ministry figures showed on Monday.

More than 42,600 cases were confirmed in the past seven days. More than 373,000 cases have been reported in France since the pandemic began, and 30,770 deaths have been blamed on the virus.

The growing number of new cases is being attributed in part to the fact one million tests are now being carried out weekly, a much higher number than early on during the crisis.

Still, the government is worried about the numbers and continues to advise people to wear masks, even out of doors.