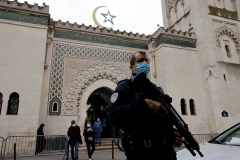 A policeman guards the Great Mosque of Paris. (Photo by Thomas Coex/AFP via Getty Images)

Paris (CNSNews.com) – The latest terror attacks in France in the name of Islam and President Emmanuel Macron’s statements on combating “separatism” have left many Muslim individuals and associations here wondering what their place is in a country where, polls indicate, most are proud to live and feel they can practice their faith without hindrance.

On the other hand, 44 percent of the respondents said they feel the majority of the population views Muslims in a poor light, with the percentage rising to 61 percent in poorest households.

Farid Hammouti, administrator of a mosque in Orléans, south west of Paris, said by phone that Muslims he meets daily are afraid, and that many of them are confronted in the streets – with more vulnerable old people and women targeted in particular.

“We would like people to go out in all cities to tell attackers to stop committing terror acts in the name of Islam, as it means they doesn’t understand the religion,” he said, adding that the authorities should also take stricter measures against the perpetrators than is presently the case.

Hammouti came to France from Morocco at the age of five and says for him France is his country.

“If someone tells me to go back to my country, where should I go?” he asked. “France is my country, not Morocco.”

Mehdy Belabbas, a 42 year-old French-born citizen of Algerian descent, told U.S. media last week he is considering leaving his country of birth, following the tensions and public sentiment resulting from the beheading of a teacher by an 18-year-old Muslim extremist last month.

That attack – supposedly to avenge the teacher's use of a cartoon of Mohammed in a classroom lesson – was followed last week by another deadly Islamist attack, when a 21 year-old who recently arrived  in France from Tunisia killed three people at a Catholic Church in Nice.

“After the [Nice] attack, five or six million people have to justify themselves,” Belabbas said, referring to the roughly estimated number of Muslims in France. (The state does not compile religious or ethnic census data.) “We don't know what is expected from us anymore.”

Naziha Mayoufi, a member of an association of Muslim groups and mosques called “Les Musulmans” (The Muslims), expressed “infinite fear and sadness for the families of the victims, for our Catholic friends.”

After the church attack, she said, she fears that “politicians and commentators may feel even more entitled to label Islam as the enemy within. And we, Muslims, we are paying the price for these extremes ideologies.”

Hakim El Karoui, president of the Muslim Association for Islam of France, told France television that French Muslim must show their solidarity [with fellow French citizens] “in a concrete way.”

“Symbolic acts are important,” he said, calling on French Muslims to combat fundamentalism and fanaticism.

El Karoui said the high concentration of immigrants in some neighborhoods is an important factor leading to radicalism.

“Between 1982 and 2015, in two Paris suburbs, the immigration population rose from 15 to 30 percent in one case and from 13 to 21 percent in the other, he said. In Paris overall, the immigrant share of the total population has increased from 18 to 22 percent over that period.

By directing new arrivals, who are often poorer and have different social norms, all to the same few locations, he said, “we create problems.”

(Immigrants accepted as legal residents in France are directed to areas where social housing is available and where mayors, usually on the left of the political spectrum, are willing to welcome them. They may also head to an area where relatives, even distant relatives, already live.)

Meanwhile the French Council of Muslim Worship (CFCM), an association launched in 2003 as a liaison between the state and the Muslims community, has been urging Macron to “pay attention to those who put all Muslims in the same bag,” since with every attack that takes place, “all Muslims are considered as terrorists.”

“Some people kill people in the name of Islam, but Islam is a religion of peace – although some Muslims use it for hate and violence,” Abdallah Zekri,  head of the CFCM’s “Islamophobia observatory,” said in a radio interview, arguing that “French Muslims support and defend the Republic.”

After the beheading of teacher Samuel Paty, Interior Minister Gérald Darmanin accused the CFCM’s Islamophobia monitor of “playing with fire” and suggested it be disbanded, saying it had not clearly condemned terrorist attacks in France.

After the Nice church attack, the CFCM called on Muslims to cancel festitivies marking Mohammed’s birthday .