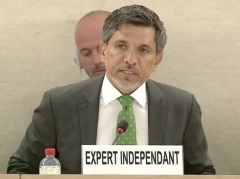 (CNS News) -- On June 25, the United Nations (UN) Independent Expert on Sexual Orientation and Gender Identity, who is responsible for promoting LGBT issues throughout the U.N., said in a press conference that changing one’s gender is a human rights “entitlement,” and that states have an “obligation” to legally recognize individuals’ self-determined gender identity.

Victor Madrigal-Borloz, the U.N. LGBT czar, presented his latest report on gender to the Human Rights Council and told them that gender is “firmly incorporated” in international human rights law.

Gender is “not inherent to persons,” he said, rather it is a “relationship between a person’s free will” and numerous socially constructed “stereotypes” that tie behaviors and tendencies to a particular sex.

“The notion that there is a gender norm, from which identities and expressions vary or depart, is based on a series of preconceptions that must be challenged, if all humankind is to enjoy human rights,” Madrigal-Borloz wrote in the report.

During the press conference, Madrigal-Borloz openly criticized Hungary for its Christian stance against promoting LGBT issues in schools.

According to Madrigal-Borloz, Hungarian laws in relation to sexual education follow an “upbringing based on Christian values” and “perpetuate stigma.”

“Comprehensive sexuality and gender education allow for the deconstruction of stigma” and it is helpful to “deconstruct stereotypes about sex, sexuality and pleasure,” Madrigal-Borloz said.

In order for a restriction of freedom to be justified, there must be a “valuable societal objective,” and he argued that there is none for a person altering their gender or sexuality.

“I see nothing within the limits of a democratic society that would justify restricting that freedom (to change one’s sex or gender),” said Madrigal-Borloz.

Additionally, he questioned Hungary’s eligibility to be part of the EU bloc, as membership in the bloc is based on the shared, pro-LGBTQ values of the bloc.

Hungary supported the creation of the position Madrigal-Borloz now holds as LGBT Czar of the U.N. in 2016.

His purpose for writing the report was to provide “tools so that the debates are not held on the basis of prejudice and stigma, but rather on the basis of evidence and legal analysis.”

In both the report and press conference, Madrigal-Borloz neglected to acknowledge the Rome Statute of the International Criminal Court, a binding treaty establishing international crime jurisdiction for crimes against humanity, which defines gender as “the two sexes, male and female, within the context of society.” It specifically denounces any other meaning.

Many U.N. member states opposed the mandate for Madrigal-Borloz's position in 2016 and resolved not to engage or acknowledge it as legitimate. This may explain why, despite the controversial nature of the issue, no member states challenged him when he presented his report.

Madrigal-Borloz will publish the second part of his report on gender this summer, which apparently will include a “black list” of globally influential individuals and organizations who oppose the LGBT agenda. He also plans to release a report on the tense relationship between religious freedom and LGBT issues.