With Winter Coming, Ukraine Says its Energy Network is Faltering Due to Russian Air Strikes 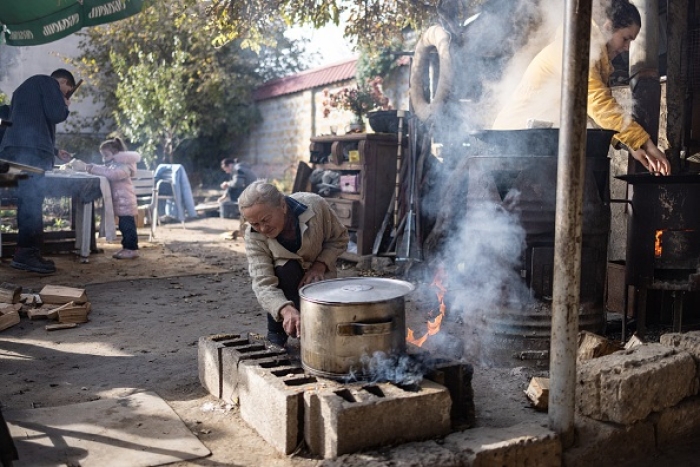 Ukrainians in an area near Kherson which the conflict has left without power, heat, or water, cook food on an outside fire. (Photo by Andrii Dubchak / Donbas Frontliner via Zaborona / Global Images Ukraine via Getty Images)

Prime Minister Denys Shmygal estimated that nearly half of Ukraine’s energy system had been disabled by the attacks and President Volodymyr Zelensky said that more than 10 million Ukrainians are currently without power — more than a fifth of the country’s pre-conflict population.

On Sunday and Monday, Ukraine’s state electricity grid operator instituted planned blackouts in all the regions of the country in an effort to reduce the burden on the national energy system.

Some officials have warned that these measures may not be enough, however. Mykola Povoroznyk, deputy head of the Kyiv city administration, told reporters that local authorities were preparing for different scenarios, including a “complete shutdown” of the capital’s power grid.

In an interview with the BBC, Maxim Timchenko, CEO of Ukraine’s largest private energy provider, DTEK, urged ordinary Ukrainians to consider leaving the country during the winter months.

“If they can find an alternative place to stay for another three or four months, it will be very helpful to the [energy] system,” he said. “If you consume less, then hospitals with injured soldiers will have guaranteed power supply.”

On Monday, Ukrainian authorities began evacuating civilians from the southern Kherson region, which was partially recaptured from Russian forces earlier this month, due to concerns that infrastructure damage in the area was too severe for local civilians to survive winter.

A senior World Health Organization official warned on Monday that millions of lives will be under threat in Ukraine this winter due to the expected power failures.

Kremlin spokesman Dmitry Peskov in a conversation with reporters on Friday blamed the widespread power outages across Ukraine on the Zelensky government’s “unwillingness to enter negotiations.”

Since October 10, Russia has launched hundreds of cruise missiles and Iranian-made kamikaze drones at Ukrainian energy facilities and other critical infrastructure. The massive air strike campaign began shortly after the appointment of General Sergey Surovikin as the top commander of Russian forces in Ukraine.

Nicknamed “General Armageddon” by the media, Surovikin previously led Russian troops in Syria, where he earned a reputation as a hardline and unconventional commander.

Russian defense analysts have argued that the strikes against energy facilities are meant to erode the Ukrainian military’s logistical foundation by depriving the country of the electricity necessary to power railways, communications networks, and factories that repair damaged equipment.

However, Zelensky and other senior Ukrainian officials have accused Russia of seeking to undermine Western support for Kyiv by sparking a new wave of Ukrainian refugees into Europe over the winter.

Ukraine recently told its Western allies that its energy network was at risk of breaking down from continued Russian strikes, due to a shortage of key replacement parts such as generators, pipes, and valves, Politico reported.

Some Russian military observers are skeptical of the claims, however, warning that Kyiv could be exaggerating the damage in order to instill a false sense of confidence among Russia’s leadership and convince the West to send new aid.

Viktor Alksnis, a former Russian lawmaker and Soviet Air Force colonel, argued that the Ukrainian energy system was likely to continue functioning for the foreseeable future since the air strikes had overwhelmingly focused on the country’s 330 kilowatt power distribution network, rather than the more powerful 750 kilowatt network.

“Moreover, the blows were inflicted on autotransformers, and not on general station control points,” he wrote in Telegram. “This suggests that there is some sort of agreement to not hit the 750 kilowatt network, which devalues the value of strikes on critical infrastructure as a whole.”