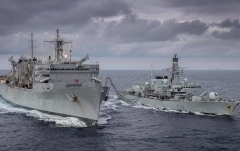 Moscow (CNSNews.com) – The United States and Russia are ramping up their military operations in the Arctic Ocean, even as a majority of exercises around the world have been canceled due to the coronavirus pandemic.

Four U.S. Navy vessels – three destroyers and a fast combat support – entered the Barents Sea on Monday together with a British Royal Navy frigate, the first time U.S. warships have sailed into the area since the end of the Cold War.

A statement from the U.S. Navy said that the operation’s mission was to “promote regional security and stability, while building trust and reinforcing a foundation of Arctic readiness.”

It also stated that the Russian Defense Ministry had been informed of the operation beforehand to “avoid misperceptions, reduce risk, and prevent inadvertent escalation.”

The Barents Sea is a part of the Arctic Ocean located off the northern coastlines of Russia and Norway. The Russian Navy’s Northern Fleet is headquartered in the Barents Sea port of Severomorsk.

On Tuesday, Russia’s Northern Fleet announced that the missile cruiser Marshal Ustinov had left Severomorsk to conduct a series of combat training drills in the Barents Sea.

“The ship’s crew will carry out a series of artillery firing at sea and air targets in naval training ranges of the fleet during naval exercises on air defense and combat with conditional enemy’s ships,” it said in a statement.

Competition between the United States and Russia in the Arctic has increased in recent years, as melting ice sheets have uncovered previously inaccessible natural resource wealth.

An often-cited 2008 U.S. Geological Survey study found that the Arctic contains a quarter of the world’s natural gas and one tenth of its oil. The region is also rich with minerals such as diamonds, iron ore, nickel, copper, and zinc phosphates.

Russia’s military activity in the Arctic has increased over the past month. In April, U.S. F-22 fighter jets intercepted Russian patrol aircraft that were flying near Alaska on two separate occasions.

Last week, Russian paratroopers conducted the first-ever parachute jump in the Arctic, from an altitude of 10,000 meters.

The U.S. and Russia are not the only countries looking to strengthen their footholds in the Arctic. In January 2018, China published a white paper calling itself a “near-Arctic state” that deserved to be treated as “an important stakeholder in Arctic affairs.”

The paper also said China hoped to establish a “Polar Silk Road” in the Arctic by developing shipping routes that could be used to strengthen its economic and scientific research presence in the region.

The U.S. opposed the Chinese initiative, with Secretary of State Mike Pompeo in a speech in Finland disputing the notion that China was “near-Arctic state.”

“There are only Arctic states and non-Arctic states,” Pompeo stated. “No third category exists, and claiming otherwise entitles China to exactly nothing.”

In late April, the United States opened a consulate in Greenland and provided the Danish territory with an economic aid of $12.1 million. A U.S. official referred at the time to an adjustment in the U.S. policy in the region, in response to challenges posed by Russia and China.

The Russian Ambassador to Denmark condemned the move as confrontational and accused the United States of attempting to “achieve dominance in this part of the world.”