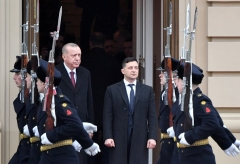 Moscow (CNSNews.com) – Amid a growing rift with Russia over the conflict in the Caucasus, Turkish President Recep Tayyip Erdogan is bolstering political and military support for Ukraine.

Meeting in Istanbul on Friday, Erdogan and his Ukrainian counterpart Volodymr Zelensky signed a memorandum to expand military cooperation, agreeing to work together on building warships, unmanned armed vehicles, and turbine engines.

“Turkey will continue to assist Ukraine in meeting the criteria for membership to the Alliance, as well as the interoperability of the armed forces of Ukraine with NATO, including through appropriate joint military exercises,” the two said in a joint statement.

The Kremlin has strenuously opposed Ukraine joining NATO for years. In 2008, President Vladimir Putin warned that Moscow would target its missiles at Ukraine if the former Soviet republic became part of the alliance. In 2014, Putin justified Russia’s annexation of Crimea by asserting a need to deter NATO from extending to Russia’s western borders.

Erdogan’s latest moves are being closely watched in Moscow.

“This development is concerning because Turkey is a member of the NATO bloc, although it has a special position in it,” said Dmitry Novikov, deputy head of the State Duma’s foreign affairs committee.  “Ukraine is seeking to join the alliance and therefore, the increased cooperation between the two countries is in one way or another linked to NATO, to Washington, and therefore with the anti-Russian course.”

“This certainly poses certain threats to the Russian Federation and must be taken very seriously.”

Over the past two years, Turkey has gradually strengthened its military and economic ties with Ukraine. Meeting with Zelensky in Kyiv in February, Erdogan announced that Turkey would provide $36 million in military aid. The two leaders also pledged to double their bilateral trade turnover from $5 billion to $10 billion.

Earlier this month, Ukraine announced plans to buy another 48 Bayraktar TB2 unmanned armed vehicles, Turkish combat drones which have been deployed on the battlefield in Syria, Libya, and Nagorno-Karabakh. Last year Ukraine bought six of the UAVs for $69 million.

Erdogan has adopted an increasingly assertive foreign policy in recent years. Ankara has deployed troops and drones to northern Syria and Iraq, quarreled with several of its NATO allies over maritime rights in the eastern Mediterranean, intervened in the Libyan civil war on behalf of the Tripoli-based Government of National Accord, and sent Syrian rebel fighters and drones to aid Azerbaijan in its conflict with Armenia over the Nagorno-Karabakh region.

During this time period, Russia and Turkey have tried to maintain their uneasy balance between cooperation and competition.

In 2017, Turkey controversially signed a $2.5 billion deal to buy Russian S-400 air defense batteries, over objections from the United States and other NATO allies. The first shipment arrived last July, and Turkey reportedly tested it for the first time in the Black Sea city of Sinop last week.

Early this year, Moscow and Ankara launched TurkStream, a 930 km pipeline that will deliver 31.5 billion cubic meters of gas from Russia to Turkey and Southern Europe across the Black Sea. Together with the NordStream 2 pipeline to Germany, TurkStream forms part of Russia’s strategy to bypass Ukraine in delivering its gas to Europe.

Despite this cooperation, Russia and Turkey support rival sides in the Syrian and Libyan civil wars. Tensions between the two sharply escalated in February, when Turkey launched a military incursion into northwest Syria to push back an Assad regime offensive against Turkish-backed rebel groups in the region.

Most recently, Moscow has is critical of Turkey’s involvement in the Nagorno-Karabakh conflict. Russia’s foreign intelligence service warned that the deployment of Turkish-backed Syrian fighters into the Caucasus could turn the region into a “new springboard for international terrorist organizations.”