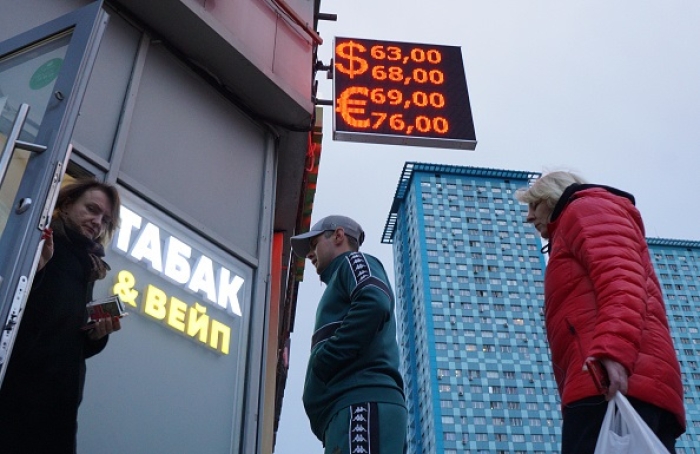 Russians line up outside a money exchange office in Moscow last month. The ruble hit a seven-year high to the dollar on Wednesday. (Photo by Konstantin Zavrazhin/Getty Images)

Moscow (CNSNews.com) – The Russian ruble hit a seven-year high on Wednesday, continuing its recovery from an initial, dramatic slump earlier this year due to Western sanctions over the conflict in Ukraine.

Although the Kremlin has celebrated the rebound as evidence that Russia is successfully overcoming sanctions, some economists argue that it masks deeper problems for the Russian economy, such as an imbalance between imports and exports along with an excessive reliance on energy sales.

When the Moscow exchange opened on Wednesday morning, the ruble’s official exchange rate strengthened to 52.80 rubles per U.S. dollar, the currency’s highest level since June 2015. By the time markets closed at 7 PM local time, it had slightly weakened to 53.15 rubles per dollar.

Previously, the ruble overtook the Brazilian currency, the real, in May to become the best-performing currency in the world, gaining more than 11 percent on the dollar since the start of the year, according to a Bloomberg dataset.

The ruble’s recent rally represents a significant turnaround to its rapid depreciation in late February and early March, when the U.S. and its allies in Europe and Asia moved to impose unprecedented sanctions against Russia over the Kremlin’s decision to send troops into Ukraine.

The economic shock from these new sanctions initially caused the ruble to lose more than 30 percent of its value. Between February 23 and March 7, the currency’s exchange rate plummeted from 81 rubles per dollar to a record low of 139 rubles per dollar.

Seeking to protect their savings from the ruble’s sharp decline in value, Russians across the country rushed to withdraw foreign currency from their local banks and ATMs. Panic buying was reported in many cities, as Russians sought to stock up on goods in anticipation of shortages and runaway inflation.

During a speech in Poland in late March, President Biden said Western-led sanctions had succeeded in turning the ruble into “rubble” and predicted that the Russian economy was “on track to be cut in half in the coming years.

Since those remarks, however, the ruble has completely recovered its pre-conflict value, and then some.

A major factor behind the rebound has been high global oil and gas prices. Since late February, Russia has earned a record $97 billion in revenue from fossil fuel exports, according to a recent study by the Center for Research on Energy and Clean Air, a Finnish think tank.

The Kremlin has used this windfall to prop up the ruble’s value through two mechanisms. In late February, it began requiring all Russian exporters to convert 80 percent of their foreign currency earnings into rubles (although that requirement was relaxed last month to 50 percent). In March, it issued an order mandating that all “unfriendly countries” begin to pay for Russian gas in rubles.

The Russian central bank has also instituted a series of non-energy related measures aimed at stabilizing the ruble, such as temporarily doubling its key interest rate from 9.5 percent to 20 percent, banning the sale of foreign currencies for six months, and prohibiting Russians leaving the country with more than $10,000 worth of foreign currency in cash.

“It is clear why this propaganda campaign was fueled and all the predictions of the dollar at 200 rubles and the collapse of our economy were made,” he said. “This was and remains an instrument in an information struggle and a factor of psychological influence on Russian society and domestic business circles.”

Yet Russian and Western economists have offered a mixed assessment of the ruble’s recent surge in value.

Denis Domaschenko, a professor at the Moscow-based Plekhanov Russian University of Economics, told the RBC media outlet last month that the strengthening of the ruble put Russia at risk of catching “Dutch Disease” – a situation in which a big, short-term boom in natural resources exports can cause the overall economy to become less competitive in the long run.

A rapid currency appreciation caused by an uptick in revenues from natural resources is one of the major signs of “Dutch Disease,” since it makes other industries in a country’s economy less competitive on price.

Another concern raised by many analysts is that the ruble’s recovery is closely tied to collapse of imports to Russia in recent months, due to sanctions and logistical disruptions.

Foreign currency “is essentially not needed now – there is nothing to buy with it, and there is no point in withdrawing it,” economics journalist Dmitry Migunov wrote in Izvestia last month.

“It is also risky for the Ministry of Finance to get involved in the purchase of foreign currency for the National Welfare Fund, since there is a possibility that these reserves may suffer the same fate as the reserves frozen [by Western governments] in March,” he added. “Demand for dollars and euros is extremely low, which sharply raises the ruble.”

On Monday, Russian Deputy Prime Minister Andrei Belousov told Interfax that the government was working on pushing the ruble’s exchange rate down, to 70-80 rubles per dollar.