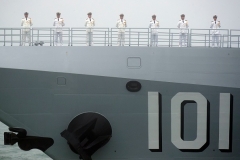 China’s Type 055 guided missile destroyer Nanchang, one of the ten Chinese and Russian warships that took part in the joint drills this month. (Photo by Mark Schiefelbein / Pool /AFP via Getty Images)

Moscow (CNSNews.com) – Russia and China have completed their first joint naval patrol in the Western Pacific, shortly after provocatively sailing through strategic seas close to Japan, a key U.S. ally.

The Russian Ministry of Defense said a total of 10 warships from both countries took part in the drill, which ran from October 17 to 23.

“The tasks of the patrol were to demonstrate the state flags of Russia and China, maintain peace and stability in the Asia-Pacific region, as well as protect the objects of maritime economic activity of the two countries,” it said in a weekend statement.

Several days earlier, the Russian and Chinese warships had sailed together for the first time through the Tsugaru Strait, a narrow channel separating Japan’s main island of Honshu and the northern island of Hokkaido.

The Japanese Ministry of Defense reported that the flotilla sailed southward off Honshu’s east coast before passing – again for the first time – through the Osumi Strait, which borders Japan’s southern Kagoshima prefecture, on the way back to the East China Sea.

Although close to Japanese territory, both the Tsugaru and Osumi straits are considered international waters, and foreign commercial and military ships do have the right to travel through them.

Nevertheless, the Japanese government said it had scrambled its fighter jets to monitor the flight of several Russian and Chinese helicopters accompanying the warships.

“We are going to do everything as a Navy to be as forward-leaning as possible to ensure that we can protect our country’s national security and economic interests, and those of our allies and partners,” he said.

Chinese state media celebrated the joint patrol as the sign of the growing bilateral military cooperation.

Chinese military analyst Song Zhongping told the Chinese Communist Party organ Global Times that the exercise allowed the two countries to practice realistic combat scenarios, and predicted that they would soon move onto more advanced drills, such as conducting patrols that include both aerial and naval elements.

“The formation of China-Russia joint combat capacity would bring about attacking measures at multiple layers and improve the forces' abilities to perform military tasks. It will provide more options to deal with regional conflicts such as terrorist attacks,” Song said.

Global Times reported separately that the joint patrol demonstrated that Russia and China were capable of reaching important U.S. military bases in eastern Japan, most notably the Seventh Fleet’s headquarters in Yokosuka.

Russian experts also emphasized the political significance of the exercise. Konstantin Blokhin, a researcher at the Center for Security Studies of the Russian Academy of Sciences, told the state-owned RT news agency that the joint patrol was likely a response to the formation of the AUKUS security pact between the U.S., Australia, and the U.K. last month.

“Against the background of the formation of a new alliance of the Anglo-Saxon countries, the maneuvers of Russia and China demonstrate that their partnership lies in deeds, not just words,” he said.

“Beijing and Moscow show their intention to continue to work harmoniously, taking into account the threats that the West is throwing at the Russian Federation and the People’s Republic of China.”

Russia and China have been conducting annual joint naval exercises since 2012, including in geopolitical hotspot regions such the South China and Baltic Seas. Beginning in 2018, China became a regular participant in Russia’s annual strategic exercises, which generally involve hundreds of thousands of troops as well as a large number of tanks, artillery, and aircraft.

In July 2019, Moscow and Beijing held their first ever joint bomber patrol mission over the Sea of Japan. South Korea and Japan charged that the bombers violated their airspace, but Russia and China repeated the patrol mission last December.

Arms trade is another burgeoning area of cooperation between the two countries. Between 2016 and 2020, Russia accounted for 77 percent of China’s weapon imports, according to the Stockholm International Peace Research Institute. The most significant of these purchases were six battalions of Russia’s elite S-400 air defense system, which analysts believe could provide China with a major boost in any potential conflict over Taiwan.

The growth in Russian-Chinese military cooperation in recent years has sparked speculation that two countries may enter into a formal alliance. However, Russian President Vladimir Putin downplayed the prospect during a speech last Thursday at the annual Valdai Discussion Forum in Sochi.

“Unlike NATO countries, we are not trying to form any closed military alliance,” he said. “There is no military bloc between Russia and China. We have no such intention.”