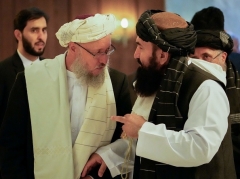 Moscow (CNSNews.com) – Russia hosted the Taliban for international talks on Afghanistan in Moscow this week, representing one of the group’s most high profile trips since seizing power in Kabul two months ago.

Hanafi and Muttaqi are both on the U.N. Security Council consolidated list of sanctioned terrorists, and as a result are subject to an assets freeze and travel ban. Anas Haqqani is “a leading figure and fund-raiser” for the Haqqani Network, a U.S.-designated foreign terrorist organization.

Although the United States had been invited to attend, the State Department said Monday it was not sending a representative due to “logistical difficulties.” Pressed by reporters, spokesman Ned Price declined to elaborate.

During his opening remarks at the conference, Lavrov praised the Taliban’s efforts “to stabilize the military-political situation [in Afghanistan], to improve the work of the state apparatus.”

At the same time, he urged the Taliban to fulfill its promises to form an inclusive government and disavow aggression against its neighbors.

"We are calling upon the Taliban movement to strictly follow the policy of preventing the territory of Afghanistan from being used against the interests of any third countries, first and foremost, Afghanistan’s near neighbors – the Central Asian states,” Lavrov said.

Following hours of negotiations, Hanafi at a brief press conference gave an upbeat assessment of the talks, but revealed few specifics. “It was a very good meeting, in a very friendly atmosphere,” he said, “The Taliban appreciates and welcomes the initiative of the Russian Federation.”

Other members of the Taliban delegation told reporters that at a private meeting with Russian officials they brought up the prospect of developing economic ties between Russia and Afghanistan.

Zamir Kabulov, the Kremlin’s special representative on Afghanistan, told reporters Russia would hold off on formally recognizing the Taliban regime.

“Certainly, this moment will come someday, but it will come when, and this was said to the Afghan delegation, when [the Taliban] begins to fulfill most of the expectations of the international community, which also concerns issues of human rights and inclusiveness," he said.

Moscow has a long and complicated history with the Taliban, which is still formally designated as a terrorist organization in Russia.

Russia during the 1990s viewed the group with hostility due to its support for Islamist militants in Central Asia and Chechnya, a predominantly Muslim region in southern Russia. When U.S.-led forces invaded Afghanistan in October 2001, Moscow threw its support behind the mission to topple the regime that sheltered the al-Qaeda terrorists responsible for the Sept. 11 attacks on America.

Russia established contacts with the Taliban in 2014, however, following years of growing tensions with the U.S. and the rise of ISIS – which Moscow began to view as the primary terrorist threat in Afghanistan.

Russia has held multiple talks with the Taliban in Moscow since November 2018, with the most recent visit coming in July of this year.

In the two months since the Taliban seized power, Moscow has alternated between expressing cautious optimism and concern. After the fall of Kabul on August 15, Russia was one of the few countries to maintain its embassy, which was subsequently guarded by Taliban fighters.

“The sooner the Taliban will enter the family of civilized people, so to speak, the easier it will be to contact, communicate, and somehow influence and ask questions,” he said in a speech early last month.

During a video call with the leaders of several neighboring states last week, however, Putin said Russia was in no rush to recognize the Taliban, citing concerns about the lack of religious and ethnic minorities in the group’s interim government.

“We understand that we need to interact with [the Taliban], but there shouldn’t be any hurry and we shall discuss that together,” he said.

Russia has traditionally had a close relationship with leaders of Afghanistan’s large Tajik and Uzbek minorities.

The Taliban’s ranks are dominated by Pashtuns, who account for around 42 percent of Afghanistan’s population. Of a total of 50 “interim” cabinet and government posts announced by the Taliban on September 7 and September 21, only six are from non-Pashtun minorities (three Tajiks, two Uzbeks and one Hazara).

The Russian military has been conducting frequent exercises in Tajikistan and Uzbekistan, two Central Asian nations that share a border with Afghanistan.

On Monday, Russia and its allies in the Collective Security Treaty Organization, a Moscow-led security bloc, deployed thousands of troops for anti-terrorist drills along the Afghan-Tajik border.