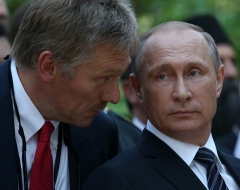 Moscow (CNSNews.com) – The Russian government is denying accusations that it is helping to incite unrest arising from protests in the United States over the death of George Floyd.

State media outlets,meanwhile, are giving blanket coverage to the protests, much of it heavily critical of the U.S. police.

Mass protests erupted across the U.S. after Floyd, a black man, died after a white policeman knelt on his neck for nearly nine minutes during an arrest in Minneapolis last week.

As some of the protests over his death became violent, with individuals engaging in looting and vandalism, former National Security Advisor Susan Rice suggested in a CNN interview on Sunday that peaceful protests had been hijacked by extremists instigated or funded by Russia.

A day earlier former New Orleans Mayor Marc Morial, also a Democrat, told CNN that he “had a suspicion for a time now that many of these sort of online protests are exploited by others.”

“The Russians in the ’16 election went to great lengths to pretend to be black activists in an effort to suppress the vote,” Morial said. “Are they involved in this? Well, we need to know now. We need to understand now, who is involved and what justifies this overwhelming show of support?”

On Thursday, Attorney General William Barr said the Justice Department had evidence of “foreign actors playing all sides to exacerbate the violence,” but did not specify who exactly these foreign actors were.

Kremlin spokesman Dmitry Peskov said early this week it was “absolutely wrong and erroneous” to blame Russia for the unrest.

“We are certainly very carefully watching what is going on in the United States,” he said. “But everything that is happening there is this country’s domestic affairs. We have never meddled in U.S. affairs and we are not going to interfere now.”

(The report on special counsel Robert Mueller’s investigation concluded that Russia did interfere in the 2016 presidential election, through “a social media campaign designed to provoke and amplify political and social discord in the United States,” and through “hacking and dumping operations” aimed at gathering and disseminating information to influence the election.)

Mark Galeotti, senior research associate of the Royal United Services Institute in London and a scholar on Russia, expressed skepticism that Moscow has had any significant involvement in fueling the protests.

“I have seen no evidence of a meaningful Russian role in the current American ‘time of troubles’ and, indeed, little evidence of glee in Moscow,” he said. “After all, an unstable America is as much a problem for Russia as for the rest of us.”

Galeotti told CNSNews.com that although Russia has for some time clearly been seeking to exacerbate divisions in both Europe and the U.S., those efforts have not been especially successful and have even backfired by turning Russia into “an all-purpose scapegoat for all kinds of extremist, divisive and destructive developments.”

“This is dangerous both because it exacerbates tensions between Russia and the West and also because it distracts attention at home from dealing with the very real crises of legitimacy and inclusion that are ripping at the democratic consensus,” he said.

Much of the coverage of the Floyd protests by the English-language versions of pro-Kremlin outlets RT and Sputnik expressed sympathy with the protestors while sharply criticizing the police.

In a June 3 video, RT commentator Lee Camp said that police in the United States “are all over the place, like an infestation, and armed to the teeth and ready to kill.”

“When you call the police, you’re inviting the possibility of someone getting murdered into the situation,” added Lee, an American left-wing comedian. “You’ve invited guys with guns who can kill with impunity.”

In a June 1 article entitled “America 2020 – Where Anti-Racists Are Terrorists & Racists Are President,” Sputnik columnist Tommy Sheridan, a Scottish socialist politician, wrote that, “America is a society and country built on the poison and bile of racism, white supremacy and violence.”

A review of 20 Facebook and Twitter posts on the Floyd protests by RT and Sputnik finds that while some featured politically charged criticism of the Trump administration and law enforcement’s handling of the protests, others were limited to footage, with no commentary attached.

One RT post on Facebook on June 2 was entitled “‘We’re horrified’: Intl media rights group cites 125 VIOLATIONS of press freedom by US police during George Floyd protests.” In the article, RT cited a statement by the New York-based Committee to Protect Journalists.

RT added the comment, “Bookmark this for the next time someone mentions ‘US’ and ‘free press’ in a single sentence.”

As of publication time, 327 users had reacted to the post, only 37 of whom listed themselves as residing in the United States.