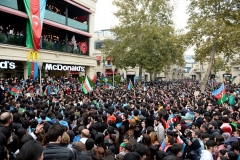 Azerbaijanis celebrate in the streets of Baku on Tuesday, after Armenia and Azerbaijan agreed a ceasefire following a string of Azeri victories in the disputed Nagorno-Karabakh region. (Photo by Tofik Babayev/AFP via Getty Images)

(CNSNews.com) – Russia has brokered a peace deal between Armenia and Azerbaijan over the disputed Nagorno-Karabakh region, ending a six-week war between the two former Soviet republics that has killed and displaced thousands.

Under the agreement, announced by the leaders of the three countries early on Tuesday morning, all fighting between Armenia and Azerbaijan was to cease at 1 AM local time.

In a coup for Azerbaijan, it will keep all of the territory in the Nagorno-Karabakh enclave its forces have captured since fighting broke out in late September. Over the next several weeks, Armenia will also be required to hand over control of several regions bordering Nagorno-Karabakh that its troops have occupied since 1994.

Nearly 2,000 Russian peacekeepers, carrying small arms, will be deployed along the front line in Nagorno-Karabakh for a period of at least five years – and possibly until November 2030, if all parties agree in five years’ time to extend the agreement.

“We believe that the achieved agreements will create necessary conditions for a long-term and full-fledged settlement of the crisis around Nagorno-Karabakh on a fair basis and in the interests of the Armenian and Azerbaijani people,”  Russian President Vladimir Putin said after the deal was announced.

Jubilant crowds gathered in the streets in the Azerbaijani capital of Baku to celebrate the agreement, waving national flags and chanting patriotic slogans.

In Armenia, by contrast, news of the deal was greeted with mourning. Armenian Prime Minister Nikol Pashinyan said he had made “the very painful decision” to sign the treaty after reviewing the military situation.

“It’s not a victory, but there is no defeat until you know yourself,” he wrote in a Facebook post on Tuesday morning. “We will never know ourselves, and this should be the start of our national unity rebirth era.”

Shortly after the deal was announced, angry protestors in the Armenian capital, Yerevan, stormed the parliament and government headquarters. Leaders of opposition parties called on Pashinyan to resign.

Although figures on the war’s casualties are unclear, thousands are believed to have been killed in the fighting. According to the United Nations, more than 130,000 residents of Nagorno-Karabakh have been displaced since hostilities began earlier this fall.

The United States attempted to broker an agreement late last month. Following separate meetings between Secretary of State Mike Pompeo and the foreign ministers of Armenia and Azerbaijan in Washington, the two combatants announced a “humanitarian ceasefire” on October 26. That deal collapsed one day later, however, with both sides accusing the other of resuming hostilities.

"The United States should be leading a diplomatic effort to end the fighting, together with our European partners, and push for international humanitarian assistance to end the suffering,” Biden said in a statement on October 28.

The conflict over Nagorno-Karabakh has its roots in the collapse of the Soviet Union. In 1988, the mountainous region’s Armenian majority voted to declare independence from Azerbaijan. An ensuing war, which lasted until a 1994 ceasefire brokered by Russia, killed 30,000 people and displaced hundreds of thousands. In the end, Azerbaijan not only failed to reassert control over Nagorno-Karabakh, but also lost control of significant swaths of Azerbaijani territory bordering the region.

On September 27, a new round of fighting broke out between the two countries. This time, however, Azerbaijan had the military edge. Armed with precision strike drones and long-range rocket systems, its forces quickly overwhelmed Armenia’s outdated air defenses and inflicted heavy damage on Armenian ground troops.

The Azerbaijani military captured hundreds of villages in Nagorno-Karabakh and pushed Armenian forces out of territories surrounding the enclave. The final blow came on Sunday, when Azerbaijani forces captured Shusha, the second largest city in Nagorno-Karabakh. Following that victory, Azerbaijani troops were only a dozen kilometers from the region’s capital, Stepanakert.

Much of Baku’s weaponry came from Turkey, which has close cultural, ethnic, and religious ties to Azerbaijan. In just the first nine months of 2020, Azerbaijan purchased $123 million worth of Turkish arms, according to data from the Turkish Exporters’ Assembly.

According to the U.K.-based Syrian Observatory for Human Rights, Turkey also reportedly sent at least 2,580 Syrian fighters to aid Azerbaijan. Both Turkey and Azerbaijan have denied the claim.

Upon announcing Tuesday’s peace deal, Azerbaijan’s President Ilham Aliyev said Turkish peacekeepers would also be stationed in Nagorno-Karabakh, although Russia and Armenia both disputed that.

Russia viewed Turkey’s intervention in the conflict with suspicion. Moscow is a longtime ally of Armenia and has long regarded the Caucuses as part of its sphere of influencee. The two countries are both members of the Collective Security Treaty Organization, a Russian-led military alliance comprising several former Soviet republics. Russia also has a major military base in Armenia, which houses over 3,000 troops.