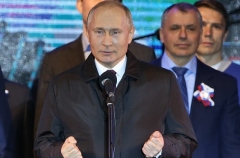 Moscow (CNSNews.com) – Russian President Vladimir Putin submitted a bill to parliament on Tuesday that would pull Russia out of the Open Skies Treaty, pointing to the United States’ withdrawal last year.

The move comes just weeks before an expected summit between Putin and President Joe Biden, who has been expressing the hope that the two governments can find areas of cooperation despite deep differences between them.

Adopted shortly after the end of the Cold War, the Open Skies Treaty was meant to help avoid an accidental war by increasing transparency between Russian and Western militaries.

Signed by Russia, the United States, and 33 European countries in 1992 and fully ratified a decade later, it granted all of its member states the right to conduct surveillance flights over each other’s territory to monitor troop movements and weapon deployments.

Since the treaty’s inception, however, both sides have regularly accused one another of breaching the agreement.

In particular, the State Department accused Russia of restricting surveillance flights over Kaliningrad, a strategic Russian enclave on the Baltic Sea, and near its border with South Ossetia and Abkhazia, two Georgian breakaway regions backed by Moscow.

Moscow countered by arguing that its actions were consistent with the treaty, and accused Washington of violating the agreement by introducing new procedures for Russian surveillance flights over Hawaii.

Kremlin spokesperson Dmitry Peskov told reporters on Tuesday that staying in the treaty was disadvantageous for Moscow since even after its departure the U.S. could still access data from surveillance flights over Russia that were conducted by its NATO allies.

Senior lawmakers have pledged for support Putin’s bill. Leonid Slutsky, chairman of the State Duma’s international affairs committee, told state-run RIA Novosti news agency all withdrawal procedures would be completed by the end of this month.

State Department spokesman Ned Price  told reporters during a press briefing Tuesday that the Biden administration has not yet made a decision on the future of U.S. participation in the treaty.

“We are at the moment actively reviewing matters related to the treaty,” he said. “Importantly, we are consulting with our allies and partners as we always do on these matters.”

News of Russia’s plans to exit the treaty comes at a tense time in U.S.-Russian relations. The Biden administration has imposed several rounds of sanctions against Russia, over its arrest of prominent Kremlin critic Alexey Navalny and alleged cyberattacks.

The U.S. has also expressed concern about Moscow’s recent military buildup near the border with Ukraine.

Last month, Biden sparked a diplomatic row when he agreed with an interviewer that Putin was “a killer.” Russia recalled its ambassador for the first time since 1998, and suggested that U.S. Ambassador John Sullivan return to Washington, which he did on April 20.

In recent weeks, however, Biden has softened his tone, saying that despite major disagreements between Moscow and Washington, his administration wanted to avoid an escalation of tensions and find issues that the two countries could work together on.

During a phone call with Putin on April 13, Biden proposed that the two hold a summit in a third country “to discuss the full range of issues facing the United States and Russia.”

The meeting is expected to take place in mid-June, when Biden travels to Europe for G7, NATO and European Union summits. Potential venues for a Biden-Putin meeting include Austria, the Czech Republic, and Finland.

The Open Skies Treaty had been viewed as a potential topic of discussion between the two presidents.

As a candidate, Biden criticized the Trump administration’s withdrawal from the treaty, warning it would “exacerbate growing tensions between the West and Russia, and increase the risks of miscalculation and conflict.”

After taking office, however, Biden took a more skeptical approach.

According to Defense News, the State Department last month advised several allies that the administration was “frankly concerned that agreeing to rejoin a treaty that Russia continues to violate would send the wrong message to Russia and undermine our position on the broader arms control agenda.”