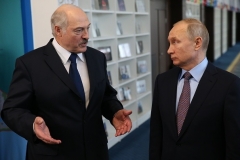 Moscow (CNSNews.com) – Russian President Vladimir Putin on Monday doubled down on his support for Belarusian leader Alexander Lukashenko by promising the embattled strongman a $1.5 billion loan, as mass protests calling for his resignation enter their sixth week.

Belarusian opposition leaders earlier warned Putin that any deals he strikes with the “illegitimate” Lukashenko will have to be renegotiated with a future government once he goes.

After a four-hour meeting between the two leaders in the Russian Black Sea resort of Sochi, Putin told reporters, “We agreed that Russia will provide Belarus with a $1.5 billion loan at this difficult moment, and we will implement that.”

He also promised that Belarus would be the first country to receive Russia’s controversial vaccine against COVID-19.

Speaking alongside Putin, Lukashenko said recent events in his country “showed us that we need to stay closer to our older brother.”

“Putin will provide Lukashenko with a $1.5 billion loan, but will not allocate that kind of money for the Tver, Tambov and the Oryol regions. Not for Russian healthcare. And not for the promised hot meals for all schoolchildren. Lukashenko needs it more, right?” tweeted Lyubov Sobol, an ally of the recently-poisoned opposition leader Alexei Navalny.

Russian support for Lukashenko has not come without a political cost. Although the Belarusian opposition insists it wants to maintain the country’s friendly relationship with Russia, anti-Kremlin messages have featured on placards and in shouted slogans at recent demonstrations.

Svetlana Tikhanovskaya, Lukashenko’s main rival in the disputed August 9 election, warned Putin ahead of the Sochi meeting that the opposition would not recognize any deal concluded by the two leaders.

“All contracts signed with the illegitimate Lukashenko will be renegotiated by the new government because Lukashenko lost the trust and support of the Belarusian people during the last election,” she wrote in the Telegram messenger app.

“I’m very sorry that you chose to have a dialogue with the usurper instead of the Belarusian people.”

Monday’s meeting in Sochi was the first time the two leaders talked face-to-face since mass protests broke out in Belarus following the election. Lukashenko, who has ruled the country virtually unchallenged since 1994, claimed to have won a sixth term by a landslide.

The opposition refused to accept the official results, claiming widespread violations, sparking demonstrations and strikes across the country. On the eve of the Putin-Lukashenko meeting, more than 100,000 protestors gathered in the Belarusian capital of Minsk demanding the president’s resignation.

The European Union and the United States have also called the Belarusian election results into question and condemned the authorities for violently cracking down on protestors.

Russia initially took an ambivalent stance on the demonstrations, before rallying behind its longtime ally, concerned that an opposition victory could push Belarus into the West’s orbit.

The Kremlin’s support for Lukashenko has gone beyond rhetoric. Late last month Putin announced that Russia had created a police reserve unit ready to intervene in Belarus if “the situation starts getting out of control.” Russian Prime Minister Mikhail Mishustin then traveled to Minsk to discuss expanding bilateral economic cooperation.

Moscow has also helped prop up Lukashenko on the information front. After hundreds of Belarusian state media workers went on strike last month, the Russian state-backed broadcaster RT reportedly sent at least two teams of journalists and technical personnel to replace them.

Although RT has denied the claim, Lukashenko in an interview with RT earlier this month said the network had played an “important” role in helping keep Belarusian state media afloat “during this difficult period.”