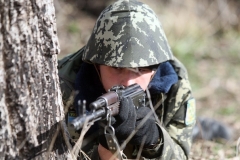 A Ukrainian border guard near the border with Russia. (File photo by Alexander Khudoteply/AFP via Getty Images)

Moscow (CNSNews.com) – The Kremlin has denied accusations by Ukrainian and U.S. intelligence officials that Russia is preparing an “imminent” invasion of Ukraine.

Kremlin spokesperson Dmitry Peskov dismissed the reports as a “deliberate smear campaign in the media” and said Russia’s recent military deployments near Ukraine were part of standard exercises.

“I can only say that in this case any movements by the Russian troops inside the country, and this relates solely to our territory, pose no threat to anyone and must be of no concern to anyone,” he told reporters.

At the same time, Peskov accused NATO of helping to organize “provocations” near Russia’s borders by supplying Ukraine with modern weaponry and equipment.

“We are certainly following the developments with great alarm since we are well aware of the considerable sway extremist politicians have in Ukraine,” he said.

The comments come amid recent media reports that Russia could attempt to invade Ukraine within the next few months.

Ukraine’s defense intelligence agency head Gen. Kyrylo Budanov told Military Times that Russia had deployed more than 92,000 troops near the Ukrainian border and was preparing to invade by late January or early February. Budanov’s agency said on Tuesday that it had seen signs that pro-Russian rebel forces in eastern Ukraine were increasing their combat readiness and carrying out drills.

Kyiv in 2015 and 2018 accused Russia of preparing a “full-scale invasion,” although in both cases the prediction turned out to be false.

Still, the U.S. intelligence community has reportedly come to a similar conclusion this time.

The New York Times and Bloomberg have both reported that U.S. officials have shared intelligence assessments with NATO allies warning that Russia could attempt a large-scale offensive into Ukraine from multiple directions by early next year.

Earlier this year, Russia deployed by some estimates over 100,000 troops near the Ukrainian border for several weeks, citing military exercises. The move generated protests from Kyiv and Western capitals although tensions began to subside in late April after the Russian defense ministry announced an end to the exercises and ordered thousands of troops to pull back from the border.

Both U.S. and Ukrainian officials, however, have accused Russia of maintaining a large military presence in the region.

In recent weeks, Russia has expressed growing frustration over U.S. and NATO military support for Ukraine. Last Thursday, President Vladimir Putin said that the West was not taking Russia’s “red lines” on Ukraine seriously, pointing to recent naval exercises in the Black Sea and arms shipments to Kyiv.

In a rare public statement on Monday, Russia’s SVR foreign intelligence service accused the West of “encouraging the [Kyiv] regime to ramp its military force” against pro-Russian rebels in eastern Ukraine.

“The provocative policy of the United States and the European Union, which deliberately strengthens in [Kyiv] a sense of permissiveness and impunity, is of extreme concern,” the statement said.

Ukrainian Foreign Minister Dmytro Kuleba denied that the government has plans to resolve the conflict in eastern Ukraine through military means.

Responding to the report, Andrei Kartapolov, chairman of the State Duma’s defense committee, warned that Ukraine would suffer a similar fate to Afghanistan.

“Let’s see whether Ukrainians will have to cling to American planes and helicopters that leave,” he told the Interfax news agency. “And when the time comes, these assistants and counselors will be there no more.”

Asked whether the administration was willing to provide more weapons to Ukraine and send military advisors, White House press secretary Jen Psaki said, “We are in close touch with the Ukrainian leaders, but I don't have anything to preview today.”

Since 2014, the U.S. has provided Ukraine with more than $2 billion in security assistance, and has allocated $408 million worth of military aid to the country this fiscal year.

Senate Foreign Relations chairman Bob Menendez (D-N.J.) introduced an amendment to the annual defense policy bill last Thursday that would impose new sanctions against Russia in the event that it launches an invasion of Ukraine.

The proposed measures would target senior Russian officials, major banks, state-owned enterprises, the country’s sovereign debt, and the Nord Stream 2 gas pipeline. The Senate is expected to vote on the bill’s amendments after Thanksgiving.