Hundreds of Protestors Detained in Russia, But Surveys Suggest Most Support Putin’s War 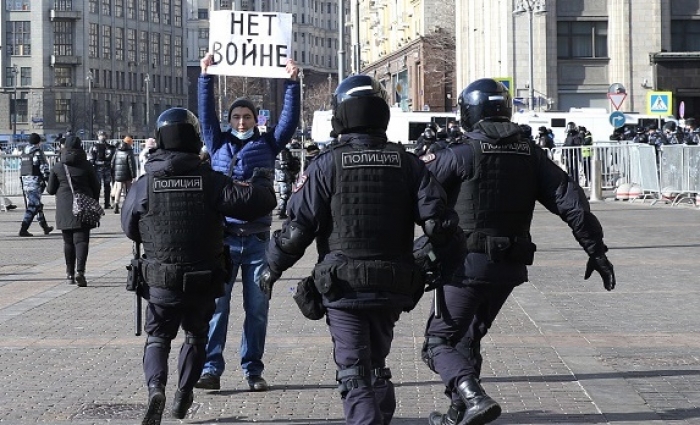 Police run to detain a man holding a sign reading ‘No war’ during an unsanctioned protest rally near the Kremlin on Sunday. (Photo by Contributor/Getty Images)

Moscow (CNSNews.com) – Hundreds more protestors were detained at anti-war demonstrations across Russia on Sunday, but as Moscow’s military campaign in Ukraine heads towards its third week there are indications that most Russian are supportive President Vladimir Putin’s war.

Police arrested over 900 people at protests in 39 cities, according to OVID-Info, an independent protest monitor. It estimates that more than 14,000 anti-war protestors have been detained since the Russian invasion of Ukraine began on February 24.

The rallies on Sunday were prompted by calls from Alexey Navalny, a prominent opposition figure currently in jail. “Even if you are alone – you are the one who can be joined by someone [else],” he wrote in a post to supporters on Instagram. “You are the most important person on the planet.”

Journalists reported that many of Sunday’s rallies had a fairly light attendance and were quickly broken up by riot police.

Alongside public protests, some Russians opposed to the war have left the country in recent weeks. Although exact figures are not available, there are indications that tens of thousands of Russians have moved abroad since the war began.

Last week, the Georgian government estimated that 20,000-25,000 Russians had entered the country over that period. The Finnish border guard agency has estimated that 44,000 people crossed into Finland from Russia in February, an increase of 27,000 from the same period last year.

Some Russian celebrities, artists, journalists, foreign policy experts, and scientists have publicly opposed the war on social media. Two of Russia’s wealthiest businessmen, Mikhail Fridman and Oleg Deripaska, urged the Kremlin to seek a peaceful resolution to the conflict.

However, recent polling suggests that such views are not representative of the broader general public, which evidently supports the war.

In a survey from the state-supported VTsIOM polling agency, published on March 3, 71 percent of Russian respondents supported the decision to conduct a “special military operation” in Ukraine compared to 21 percent who opposed it.

A separate VTsIOM survey found that Putin’s approval rating had increased by more than ten points since the beginning of the war, rising from 64.3 percent on February 20 to 74.6 percent on March 6.

Non-state affiliated pollsters have also reported broad public support for the invasion. A survey conducted last week by a group of independent research organizations concluded that 58 percent of Russians were in favor of the war in Ukraine, while 23 percent opposed it.

In recent weeks, supporters of the Russian invasion have organized flash mobs and automobile parades in cities across the country. Many have posted memes on social media celebrating the Russian military and criticizing the Ukrainian government and NATO.

A group known as the “March for Solidarity between the Army and the People” said that more than 25,000 of its members had signed up to take part in a pro-war effort demonstration in Moscow.

After city authorities rejected the application to hold the rally on Sunday on “epidemiological grounds,” the group vowed to continue to offer public support for the war in other ways.

Leaders in influential institutions such as the Russian Orthodox Church have also endorsed the Kremlin’s actions. During a sermon last week, Patriarch Kirill framed the war as a struggle between supporters of traditional Russian values and those of the liberal West.

Since the invasion began, the Kremlin has adopted legislation that criminalizes spreading “fake news” about the military or calling for sanctions against Moscow. Violators face up to 15 years in prison.

In response, several major Western media outlets announced that they would stop reporting from Russia until it became clear how the legislation would be enforced.

Authorities have also blocked or restricted foreign social media platforms such as Facebook and Twitter, along with several of Russia’s few remaining liberal opposition media outlets.

In addition to the media environment, another reason for broad public support for the war effort appears to be a widespread perception that Moscow had no choice but to take action.

A survey in late February by the Levada Center, a leading independent Russian polling agency, found that 60 percent of Russian respondents said the U.S. and NATO were primarily at fault for the escalation in Ukraine. Another 14 percent said that the Ukrainian government was to blame. By contrast, only three percent of respondents viewed Russia as the main “initiator” of the escalation in Ukraine.