Citing Sanctions, Foreign Minister Says Russia is ‘Working Actively’ to Move Away From the US Dollar 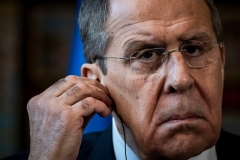 Moscow (CNSNews.com) – Russia is “working actively” to move away from the U.S. dollar and Western payment systems, Foreign Minister Sergei Lavrov said during a visit to Iran this week.

During an interview with Iran’s state-owned IRNA news agency. Lavrov argued that U.S. sanctions against the Iranian regime made “it important to step up efforts to reduce risks associated with sanctions and potential expenses for economic operators.”

“In particular, gradual steps should be taken to move towards de-dollarization of national economies and transition to payments in national or alternative currencies, as well as to stop using international payment systems controlled by the West,” he said. “Russia has been working actively to that end. We see great prospects for cooperation in that field with all interested international partners.”

Asked about Lavrov’s comments, Kremlin spokesperson Dmitry Peskov told reporters Russia needs to be prepared for new U.S. financial sanctions, including the possibility that the country could be disconnected from the Visa and MasterCard payment systems. He added that Russia could hedge against such risks by establishing “systems to strengthen sovereignty in all sectors of the economy [and] banking.”

Russia has been pivoting away the dollar since 2014, when the U.S. and many European governments targeted senior Russian officials and sectors of the Russian economy for sanctions in response to Moscow’s annexation of Crimea and support for separatists in eastern Ukraine.

Dedollarization was embraced by the Kremlin as a means of reducing the impact of U.S. sanctions. The greenback’s status as the world’s most widely-used currency allows the U.S. government to impede transactions by sanctioned companies or individuals, since any purchase or payment involving dollars is at some point processed through the U.S. financial system.

In 2018, President Vladimir Putin admitted that Washington’s economic pressure had “forced” Russia to lessen its dependence on the dollar.

“We are not seeking to walk away from the dollar – rather, the dollar is walking away from us,” he said at the time. “Those who take these decisions are not just shooting themselves in the foot but a bit higher, because this instability in making payments in dollars is causing quite a few economies to look for alternative reserve currencies and create settlement systems independent of the dollar.”

In recent years, Moscow has dumped more than half of its central bank’s dollar reserves. Between 2017 and 2020, the dollar’s share of Russia’s international reserves fell from over 46 to 23 percent as the country shifted its holdings to euros and China’s yuan. A report from the Russian Central Bank in January revealed that for the first time ever, Russia was holding more gold than dollars in its reserves.

Russia has also significantly cut down on its usage of the dollar in trade settlements with China, India, Turkey, Iran, and fellow members of the Eurasian Economic Union, a Moscow-led trade bloc consisting of several former Soviet republics.

Last week, the Central Bank announced it would begin pilot tests for a digital version of the ruble later this year or early next year. Anatoly Aksakov, chairman of the State Duma committee on financial markets, told the state-owned RT news agency that the new digital currency would be part of a broader effort to “phase out the dollar.”

The U.S. dollar has been the world’s dominant foreign reserve currency since the end of World War II. According to the International Monetary Fund, over 60 percent of all foreign bank reserves are denominated in dollars. High global demand for the dollar strengthens the buying power of American consumers and allows the U.S. to borrow at lower interest rates.

But some economists have argued in recent years that Washington’s sanctions policies could weaken the dollar’s global leadership in the long run. In 2016, then-Treasury Secretary Jack Lew warned that “sanctions overreach” could push other countries to move away from the dollar and the U.S. financial system as a whole.

“While sanctions are a valuable alternative to more severe measures, including the lawful use of force, it is a mistake to think that they are low-cost,” Lew said.

“And if they make the business environment too complicated – or unpredictable, or if they excessively interfere with the flow of funds worldwide, financial transactions may begin to move outside of the United States entirely – which could threaten the central role of the U.S. financial system globally, not to mention the effectiveness of our sanctions in the future.”