Bristling at Trump’s Plans for Syrian Oilfields, Russia Accuses US of ‘State Banditry’ 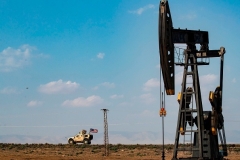 A U.S. military vehicle drives past an oil pump jack in northeastern Syria on Saturday. (Photo by Delil Souleiman/AFP via Getty Images)

Moscow (CNSNews.com) – Russia has positioned itself to be the number one foreign player in Syria’s modest energy industry once the civil war is over, and is troubled by President Trump’s plans to secure – and possibly have U.S. companies exploit – the oilfields in the east of the country.

Early last year, Moscow and Damascus signed a deal that provided Russia with exclusive rights to oil and gas production in Syria.

On Saturday, a convoy of about a dozen U.S. armored vehicles and trucks was spotted leaving northern Iraqi and heading into Syria. A U.S. official told CNN they were headed for oilfields in the Deir ez-Zor area.

Russia’s Defense Ministry spokesman denounced the Trump administration’s decision to maintain troops near the oilfields, accusing the United States of “international state banditry” and of aiding oil smuggling in the region.

In a statement posted on Facebook, Major General Igor Konashenkov said only the Assad regime has a legitimate claim to the oilfields, and that the U.S. therefore has no right to deploy troops there.

Oil and other mineral resources on Syrian territory “do not belong to the IS[IS] terrorists, and definitely not to the ‘American defenders from IS[IS] terrorists,’ but exclusively to the Syrian Arab Republic,” he wrote.

“Neither in international law, nor in American law itself – there has never been and there will never be a single legitimate task for the American troops – to protect and defend the hydrocarbon accumulations of Syria from Syria itself and its people,” Konsashenkov added.

“Therefore, what Washington is doing now, the seizure and armed control of oil fields in Eastern Syria, is, put it simply, an international state banditry.”

The ministry spokesman also charged that oil smuggling, not counterterrorism, was the real reason for the U.S. decision to leave troops behind in eastern Syria.

Konashenkov accused the U.S. military of having provided security to oil smugglers in the area. He posted satellite images which he claimed showed American troops and mercenaries escorting fuel trucks carrying smuggled oil.

“Under the protection of American military personnel and American PMC [private military company] groups, fuel trucks from the oil fields of Eastern Syria are being smuggled to other states,” Konashenkov wrote. “In case of an attack on such a caravan, special operations forces and US military aviation are immediately involved to protect it.”

The Trump administration announced on October 13 that it would fully withdraw U.S. forces from northeastern Syria, but subsequently signaled that it plans to leave several hundred U.S. troops in the east of the country.

Defense Secretary Mark Esper said on October 21 that the troops would ensure that the oilfields do not fall into the hands of “ISIS and any other groups that may want to seek that revenue to enable their own malign activities.”

Four days later he confirmed that actions were underway “to strengthen our position at Deir ez-Zor to ensure that we can deny the – deny ISIS access to the oil fields.”

“Because we want to make sure that they don’t have access to the resources that may allow them to strike within the region, to strike Europe, to strike the United States,” Esper added.

Trump has indicated that the U.S. has a broader interest than preventing the oil from falling into terrorists’ hands, however.

During his Sunday press conference announcing the death of ISIS leader Abu Bakr al-Baghdadi, Trump raised the possibility of an American company getting the rights to the Syrian oilfields.

“What I intend to do, perhaps, is make a deal with an Exxon Mobil or one of our great companies to go in there and do it properly,” he said, questioning the efficiency of current production processes.

“Right now, it’s not big,” he said. “It’s big oil underground, but it’s not big oil up top, and much of the machinery has been shot and dead.”

As a result of the drawn-out civil war, the Assad regime lost control of huge swathes of the country, including northeastern Syria and Deir ez-Zor area.

The conflict greatly disrupted the country’s oil production, forcing the regime to rely on imported oil from Russia and Iran to meet domestic needs, and Damascus is keen to regain control of the Deir ez-Zor oilfields – which produced around one-third of Syria’s oil prior to the beginning of the civil war in 2011.