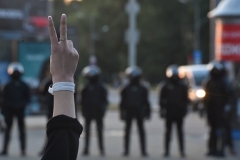 A woman gestures in front of riot police during an anti- Lukashenko rally in Minsk on Monday. (Photo by Sergei Gapon/AFP via Getty Images)

Moscow (CNSNews.com) –  Police and protestors continued to battle across Belarus Tuesday, two days after a controversial election that handed victory to President Alexander Lukashenko, the longtime autocrat ruling what has been dubbed “Europe’s last dictatorship.”

In a dramatic development earlier, Lukashenko’s main rival fled the country, suggesting her family’s safety had been threatened after she – like many others – refused to accept as legitimate the incumbent’s supposed landslide victory.

The Organization for Security and Cooperation in Europe (OSCE) has not recognized any election in Belarus as free and fair since 1995.

Protestors in Minsk responded by erecting barricades along major streets. They also fought back against the police by throwing Molotov cocktails and setting off fireworks.

On Tuesday, workers at several major factories joined a nationwide strike. The organizers of the strike have pledged that they will not return to work until Lukashenko steps down.

The mass protests erupted after Lukashenko was declared the winner of the country’s presidential election with 80.2 percent of the vote. His main rival, 37-year old former school teacher Svetlana Tikhanovskaya, was reported to have received just under 10 percent of the vote.

The opposition has refused to recognize the results due to allegations of widespread fraud. A video emerged Sunday showing an election official at a polling station in Minsk climbing out of a window and down a ladder, carrying a bag filled with what appeared to be ballot papers.

An unofficial exit poll conducted by 76 volunteers which surveyed 85,500 voters found that Tikhanovskaya won the election with 72.1 percent of the vote, with Lukashenko receiving just 13.7 percent.

Lukashenko has ruled Belarus virtually unchallenged since 1994. Once a popular leader, credited by many Belarusians for steering the country back from the brink of chaos during the 1990s, his public support has diminished in recent years.

The economy has never fully recovered from a major financial crisis in 2011, and Lukashenko has repeatedly refused to relax state control of the economy, against the advice of his own ministers.

Independent public opinion polling was banned in Belarus in 2016, but surveys recorded just before the restriction was enacted put Lukashenko’s approval rating at below 30 percent.

The coronavirus pandemic further undermined Lukashenko’s popularity. Instead of instituting a national lockdown, he ridiculed concerns about the virus and suggested Belarusians could protect themselves against COVID-19 by drinking vodka or playing hockey.

Shortly after he announced in May that he would run for a sixth-term in office, mass demonstrations broke out, and hundreds of thousands of Belarusians signed petitions to register opposition candidates.

In response, the authorities denied registration to three of Lukashenko’s strongest opponents and eventually arrested two of them. Tikhanovskaya, who entered the race after her husband was blocked from running and later arrested, was the only independent candidate allowed on the ballot.

Despite her lack of political experience, Tikhanovskaya proved to be a formidable opponent, with rallies in cities and villages drawing unprecedented crowds. On July 30, more than 60,000 people gathered in Minsk to support Tikhanovskaya’s candidacy, making it the largest rally in the history of Belarus.

After initially announcing plans to contest the election results, Tikhanovskaya went missing for several hours on Monday. State television later released a hostage-style video of her, sitting at the central election commission office, and reading from a script that called for her supporters to stand down.

Tikhanovskaya then fled to Lithuania, where she posted online a video explaining that she left Belarus to protect her children.

“I know that many will understand me, many will judge me, and many will begin to hate me,” she said. “But God forbid anyone face the choice I had.”

Lukashenko’s crackdown has provoked widespread condemnation from Western leaders, with the White House calling it “deeply concerning” and Germany urging the European Union to reimpose previously-lifted sanctions against Belarus.

Although Russia has traditionally been Lukashenko’s most important ally, relations between the two soured recently due to Belarusian strongman’s reluctance to pursue closer political integration with Moscow. Late last month, he accused Russia of sending mercenaries to Belarus in an effort to undermine his rule. The Kremlin denied the allegation.

Several pro-Kremlin newspapers voiced sympathy for the protests in Belarus. Konstantin Zatulin, deputy chairman of the State Duma’s committee on post-Soviet affairs, stated that the election “was accompanied by total falsification” and called Lukashenko “deranged.”