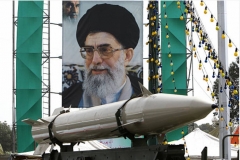 (CNSNews.com) - Ayatollah Ali Khamenei, who has been Iran’s ‘Supreme Leader’ for more than three decades, sent out a series of tweets on Friday, mocking the United States for the mob that laid siege to the U.S. Capitol and defending Iran's enrichment of uranium.

“Have you seen the situation in the U.S.?” the Ayatollah asked rhetorically on Twitter. “This is their democracy and this is their election fiasco. Today, the U.S. & ‘American Values’ are ridiculed even by their friends.”

“The US openly says its interests require instability in this region,” the Ayatollah said in a second tweet. “The US wanted a civil war in #Iran in 2009, & now God has afflicted them with the same predicament in 2021. The recent chaos reached a point where #Congress members had to escape through secret tunnels.”

The Ayatollah Khamenei then turned his attention to Iran’s nuclear program in a fourth tweet.

“Iran’s majlis & gov’t’s decision to enrich uranium to 20% is totally logical & wise,” Khamenei said. “When they don’t abide by any of their JCPOA commitments, it’s nonsensical for Iran to abide by all its commitments. If they return to it, so will we. Our logical demand is the lifting of sanctions.”

The “JCPOA” is the “Join Comprehensive Plan of Action,” which was the nuclear deal that Iran made in 2015, when President Barack Obama was in office, with the five members of the U.N. Security Council (which includes the U.S.) and Germany. President Donald Trump withdrew the U.S. from the JCPOA in May 2018.

“The Islamic Republic of Iran is an authoritarian theocratic republic with a Shia Islamic political system,” says the State Department’s latest Country Report on Human Rights in Iran.

“The supreme leader is the head of state,” it says. “Ayatollah Ali Khamenei has held the position since 1989.