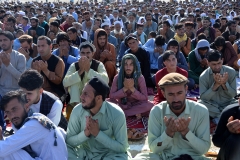 (CNS News) -- Extremist groups in Afghanistan, such as ISIS and the Taliban, are decimating religious minorities to the extent that the Sikh community faces near-extinction, according to the latest report by the U.S. Commission on International Religious Freedom (USCIRF).

In addition, 3,035 civilians were killed in 2020, "with some of the most brutal attacks targeting religious minorities," reads the report, including an attack on a maternity hospital, which killed more than 20 people and two newborns.

Due to the continued attacks on the religious minority in Afghanistan, the country has been “recommended for special watch list” by the USCIRF. The purpose of the Special Watch List (SWL) “designation is intended to focus the attention of U.S. policy-makers on the worst violators of religious freedom globally.”

“In 2020, religious freedom conditions in Afghanistan continued to trend negatively amid the country’s ongoing political instability,” according to the report. The U.N. documented that there were 8,820 civilian casualties in 2020, among which 3,035 were killed. The Taliban were “responsible for 45 percent of the civilian casualties,” said the U.N.

Attacks by the Taliban or its proxy warriors, according to the USCIRF report, included a March attack on the gurdwara, a Sikh house of worship, in Kabul, which killed 25 Sikhs; a memorial service for Abdul Ali Mazari, which killed 32 people and wounded 50; two roadside bombings in Bamiyan, which killed 14 people; and an education institute in Shi’a Hazara, which killed “dozens of students.”

“In May, terrorists attacked a maternity hospital in Dasht-eBarchi, a majority-Hazara neighborhood of Kabul,” reads the report. “The attack killed more than 20, including two newborns, causing Doctors Without Borders/Médecins Sans Frontières to end its longstanding activities and withdraw from the hospital.”

As a result of these continued persecutions, religious diversity in Afghanistan has declined. The population now is 99.7% Muslim – approximately 89.7% Sunni and 10% Shi’a. Islam is the official state religion and the legal system follows sharia, including penalties for blasphemy, apostasy and proselytizing. Apostasy is punishable by death.

There are a few Hindus, Sikhs, Baha’is, Christians, Buddhists, and Zoroastrians left in Afghanistan, and one known Jew.

“Driven by societal discrimination influenced by extremists, Sikhs and Hindus are subject to harassment, including physical assaults, abduction, land grabbing, looting, and pressure to convert,” reported the USCIRF. “In addition to the incidents above, in June, insurgents reportedly kidnapped Sikh community leader Nidan Singh Sachdeva ….”

“The Hindu and Sikh population dropped from about 250,000 in the early 1990s to less than 1,000 in 2019,” states the report.  “After the 2020 Kabul gurdwara attack and kidnapping of Sachdeva, the number dropped to around 200, a near extinction of the once robust community.”

The USCIRF recommends to the U.S. government that Afghanistan be put on the State Department’s Special Watch List (SWL) for “engaging in or tolerating severe violations of religious freedom pursuant to the International Religious Freedom Act (IRFA) and continue to designate the Taliban as an “entity of particular concern” (EPC) for engaging in systematic, ongoing, and egregious violations of religious freedom, as defined by IRFA.”

The USCIRF also advices that the U.S. incorporate freedom of religion in their peace negotiations with Afghanistan, address religious freedom concerns such as protection for places of worship, and help faith leaders and theologians to work together.